Not Bosch, but a determined reporter

If you need a good detective story to read, Bob Moyer can help you out. Here he takes a look at the latest from Michael Connelly. 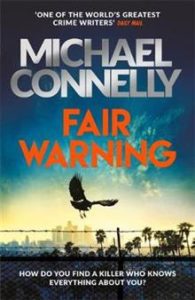 Poor Jack McEvoy. He has appeared in only three Michael Connelly novels, and Harry has been in umpteen. A comparison is inevitable, and Jack doesn’t come out too well. Harry is a principled detective who stays the course and comes up with a killer. Jack is a reporter who will kill for a story, and even throw his girl friend under the bus to get one — which he has done. Harry has taken a dismissal and retirement from the force with dignity and a certain stoic grace. The last time we saw Jack, he was a star reporter with a bestseller, a new car and fancy digs. Now, a few years later, he’s driving the same car, living in a smaller apartment, and working for an online news agency called Fair Warning, desperate for another big story. He’s not Harry Bosch.

When a pair of detectives braces him about the death of a woman he dated once a year ago, he senses a bigger story. As he dives in, he discovers a deeper pattern of murders, involving a DNA ancestry website. The cops don’t want him interfering, his editor doesn’t want him wasting time on something that won’t bring in money, but here’s where Harry and Jack have something in common — they’re relentless when they get a whiff of the truth.

Jack’s investigation takes him closer to the serial killer and into the unregulated world of DNA samples. The further Jack goes, the more people die, the more he is endangered. The plot here is classic Connelly, with twists right up to the very end.

The book is a testament to real journalism, and a textbook example of how to research and write a story. Connelly was an investigative reporter in another life, and Jack feels like an alter ego to that reporter. Harry Bosch is not Jack — but Michael Connelly might just be.