Bob Moyer reviews the latest John Sandford Prey novel starring Lucas Davenport. If you like what he’s describing, and haven’t yet encountered this series, you have some reading to do. Enjoy. 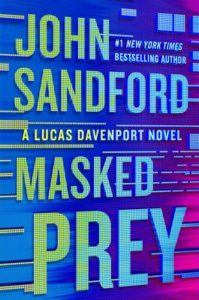 Over the course of 29 previous Prey novels, John Sandford has revealed a few things about Marshall Lucas Davenport. He operates outside of most federal agencies, at the discretion of a few powerful men. He can be collaborative and witty, especially with his cohorts Bob and Rae. He has a panoply of polo shirts, all varying colors, and at least a couple of handmade suits. He collects guns, both legal and illegal. Most of all, however, he is a hunter. “I hunt,” he tells a colleague. “That’s what I do.”

In this case, his Prey is a group or person who has put up a website called 1919, neo-Nazi code for SS. It’s pictures of high-profile politicians’ children, accompanied by rightwing screeds. It’s an offering, daring someone to take action. No crime has been committed, the FBI can’t do anything — here comes Lucas.

He investigates a series of rightwing groups that could have been copied and pasted from the latest Southern Poverty Law Center’s website, most of them “anti-whatever.”  To the author’s credit, he does not make these straw men to be blown down, but fleshed-out characters, giving body to some far-right thinking. His creations are characters, not caricatures. Davenport’s instincts finally lead him to the source of the website. Next, he has to find out if anyone, a “lone wolf,” has taken up the challenge.

Of course they have, early on. That is part of the tension here, as Davenport turns his attention to his next Prey —a Jason Bourne fan who thinks “The country was being invaded by people of inferior cultures and inferior races. The real, vital white America was being submerged.”  He’s out there, but Davenport has no idea where. Proving once again how relentless and ruthless he can be, he baits a dangerous trap all by himself. Of course.

Sandford is a master of taking the plot on unexpected turns, and Davenport is just the one to follow them. Be assured that he will be back to hunt another Prey.

This entry was posted in Detective fiction, Thriller/Suspense. Bookmark the permalink.