What’s wrong with Major League Baseball? Paul O’Connor, a longtime fan, takes a look at two books published decades ago that warn us about the problems facing the sport now – and no, it’s not all about the pandemic. 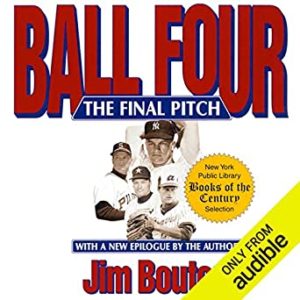 Major League Baseball is a mess, and COVID-19 is only minutely responsible.

In the past half-century, baseball has gone from the National Pastime to an athletic afterthought. The game is too slow. Ticket prices are too high. Too many Americans no longer care.

Jackie Robinson might have broken the color barrier and given the Civil Rights Movement momentum, but African Americans today can’t be coaxed into the game, a game that every year is increasingly staffed with foreign players.

The owners are greedy. The players are greedy. In the middle of a national public health crisis, with the season on hold, the two sides could not agree on how to play a few games and give us an athletic diversion. Instead, an abbreviated season will proceed by ownership fiat.

If Jimmy Breslin and Jim Bouton could be brought back to life, they might both say, “Of course. We warned you a half century ago that the game was headed for trouble.” 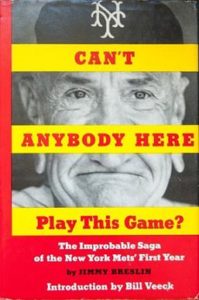 While neither of their books is best remembered as prophecies on the future of the game, the criticisms both made, Breslin in 1963 and Bouton in 1970, stand out today.

Breslin, in his 126-page history of the first year of the New York Mets’ existence, repeatedly speaks to the greed that drove National League owners to first fleece Joan Payson, owner of the Mets, for the right to own a team and then left her with a collection of players unmatched for ineptitude in the sport’s history.

Bouton, in his memoir of the 1969 season, spoke of the same greed on the part of owners regarding players. This greed eventually led to the strengthening of the Major League Baseball Players Association, the end of the reserve clauses that tied players to one team and, therefore, to the escalation of salaries and ticket prices.

In one of the epilogues included in the 20-hour recording, one written years after the book was published, Bouton speculates that had owners simply been fairer to players in earlier years they wouldn’t be paying multi-million dollar salaries in the present.

When the two authors aren’t speaking to the greed of the owners, they retell the kind of stories that made us love baseball in previous lifetimes. Breslin, who was probably the funniest columnist working in New York at the time, goes into hilarious detail regarding the Mets and their ineptitude. They managed to lose games on bone-headed plays that, honestly, my Little League teammates knew better than to make when I was 12. Bouton, who wrote one of the first inside-the-locker-room tell-all books, has stories that are so funny that he, in reading his own book for Audible Studios, can’t help but laugh out loud more than 40 years later. It is one of the charms of the audiobook.

But Bouton, in 1970, noticed one of the biggest flaws baseball faces on the field today – pace. The game was too slow, he said, and that was before managers changed pitchers three times per inning and batters retightened their batting gloves between every pitch. He said that young people were too accustomed to a faster pace of life, and baseball needed to speed it up.

Breslin’s talents were widely known, but it took everyone by surprise that a broken-down starting pitcher, struggling to make it back into the big leagues as a knuckleball-throwing reliever, could master the art of sentence construction as well as Bouton did. His short diary entries rarely run more than a paragraph or two. The result is a narrative that possesses the very thing baseball needs today – a quickened pace of play.

Bouton was a master of characterization through the anecdote. His tales of such fellow players and coaches as Sal Maglie and Frank Crosetti are the embodiment of the writer’s directive to “show, don’t tell.”

Breslin, who may have been handed the best anti-hero material of all time, need only retell the baseball mistakes of such players as Marvelous Marv Throneberry and Choo Choo Coleman to get his readers laughing out loud. Add Breslin’s talent, and it is almost an unhealthy read, one that threatens bodily harm from too vigorous laughter.

Both writers have almost perfect timing in the telling of their stories, also. A daily newspaper column in New York and a season in a bullpen are great incubators for wise guys and their wisecracks.

While both writers clearly love baseball, their books tell of baseball dystopia, Breslin’s on the field and in the boardroom, Bouton’s in the locker room and on road trips. While Breslin’s book was well received at the time, Bouton’s earned him a lifetime of animosity from other players and the baseball establishment. But Time magazine listed it as one of the 100 most important books of nonfiction, and the New York Public Library included it on its list of books of the century.

I doubt Ball Four would find a publisher today. It is horribly sexist. This is Mad Men without the suits and ties. It makes the central argument of the Me Too movement.

But while Bouton may have been behind the times with regard to gender, he was way ahead with regard to race. It is astounding to listen to Bouton’s 50-year-old words about racial injustice during our current national reckoning over race relations. Almost everything we’re discussing now Bouton said in his book.

God, I miss baseball, but each year I see a game played more for corporate interests and less for the fan. Breslin and Bouton warned us. The owners didn’t listen.