A strange and haunting place

Mick Scott brings our attention to an intriguing book published in 2010 to considerable acclaim. 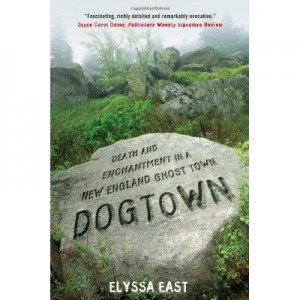 SAVE. BE CLEAN. USE YOUR HEAD. GET A JOB. These are but a few of the 24 moral principles carved into stone through the efforts of millionaire and one-time land owner Roger W. Babson – stone boulders randomly spread throughout Dogtown, an amorphous patch of dark woodland, 3,000 or more acres large, placed roughly between Gloucester and Rockport, Mass. The carvings – which provided a few jobs to out-of-work stone masons during the Great Depression – are now but one oddity among many in the area. Home to tales of pirates, witches, hobos, escaped slaves and other denizens of society, the uneasy woods of Dogtown have served over the years as inspiration to nature lovers and also as an example of the sinister air that some places seem to exude naturally.

Author Elyssa East first became aware of Dogtown as an art student, as she gleaned the work of a gifted but largely forgotten modernist painter, Marsden Hartley, who visited Dogtown on three separate occasions in the 1930s, making landscapes of the area a primary focus of his art. Hartley, suffering from anxiety and exhaustion when he arrived, found healing and inspiration in the stark, deserted surroundings, which he found to be original enough to compare to Easter Island and Stonehenge. Other artists have also been touched by inspiration over the years, such as postmodernist poet Charles Olson (who taught and was an administrator at Black Mountain College in the 1950s), who based a magnum opus that stretched over 20 years on Dogtown.

Area residents sometimes found there a respite from the bustle of city life. A few lived on its edges, hiking and dirt-biking its trails – though many more avoided it entirely. And one man, Peter C. Hodgkins Jr., an eccentric misfit who grew up in the area, found a different type of inspiration that resulted in his 1984 conviction for murdering Ann Natti, a popular school teacher who was walking through the Dogtown woods to meet a friend. The crime was both brutal and abrupt, the apparent result of a disturbed mind that fed on isolation in Dogtown.

Natti’s death and Hodgkins’ trial, which East describes in imaginative detail, provide a framework for the book, but it is also a thoroughly researched history and travelogue in which East converses with both the effusive and the tight-lipped, investigating the reticent local communities, revealing unusual practices and customs that echo H.P. Lovecraft’s New England. At one point during her several visits to the area, she described her personal connection: “I kept coming back to Dogtown because Hartley’s painting and story had opened up something in me that had long been shut down; the hope that I could better endure that anxious, lonely feeling that I had carried around with me for most of my life… .”

Dogtown itself, first being sparsely settled by Europeans in the 18th century, transits through the years from being cleared for settlement to being abandoned to overgrowth; from periods of being neglected to civic attempts at being managed. Colonial ruins dot the area, along with the inscribed boulders, abandoned granite quarries and trails that seem well-worn but deserted. The area can seem both harmless and haunted, depending on … who knows what.

At the end of the book one feels a strange lack of completion – despite East’s efforts, conclusions about Dogtown are elusive. There are, no doubt, mysteries yet to be solved in Dogtown.