Survivalist in a high-tech world 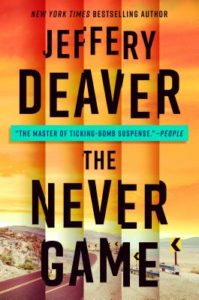 Jeffery Deaver gives us not only a gripping thriller but also a timely story in The Never Game, the first novel in his new Colter Shaw series.

Colter Shaw, raised in a survivalist family in the California wilderness, is a “reward seeker” by profession, using his considerable tracking, reasoning and survival skills to find people who have gone missing for one reason or another. He’s not a cop, and he’s also not a bounty hunter. He takes on cases that interest him, or that he considers worthy, and he doesn’t seem to worry a lot about the size of the reward.

We come to understand that he has other resources. He also has a complicated past, including some family mysteries he’s trying to solve.

Colter takes the case of a missing college student whose father has scraped together money for a reward.

That case leads him to another, and things grow more interesting and more dangerous from there.

Colter finds himself learning a lot about the darker sides of Silicon Valley and the high-tech world, especially the world of video games. The kidnapper he’s tracking seems to be playing out in real life a game that involves people being abandoned in a threatening situation with five random objects that might – or might not – help them escape before they are killed.

Soon Colter is helping the police, even though they are wary of him and question his motivations.

The tension mounts as he races to figure out what’s going on and save the kidnaping victims. Almost too late, he realizes he’s not the only one doing the hunting, and he’s someone else’s prey.

This is a well told tale, with plenty of twists, turns and surprises, but none that stretch credulity as things become clear. Deaver handles some complicated technological details in an understandable way.

The story is compelling, and if you listen to the audio book read expertly by Kaled Griffith, you’ll find yourself taking the long way to get to your destination – gripping the steering wheel tightly as you drive.

Deaver offers tantalizing hints about the real story of Colter Shaw, but there’s much to be discovered in what promises to be a popular series.