On the rough streets of D.C.

Bob Moyer is on a roll when it comes to book reviews. Here he takes a look at the latest installment in a crime series that’s worth a try. 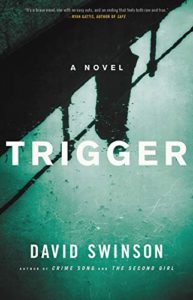 Frank Marr is a good detective with some bad habits – Laphroag 18, Jameson, rum, cocaine, marijuana and raiding drug houses. It’s a long list of things that can be a Trigger. He lost his job as a D.C. cop, and his girlfriend, because of drugs. He’s sworn off the hard stuff, depending on a diet of pills and alcohol to keep him from letting “…the weak back in.”  He’s surprised, then, when the former girlfriend calls him. She needs help, and he’s the best. She hires him to help clear a client of hers, a cop buddy of his named Tony Luna. Tony shot an unarmed guy, but he insists the kid had a gun. She wants Frank to find out if there was a gun. He takes the case, and sets off to prove his buddy wasn’t lying.

That’s the framework of the novel, but the real story here is the relationship between Frank and a guy named Calvin. It’s a “bromance” without much “mance” in it. Frank bumps into Calvin about a year after he left him for dead on a riverbank; Calvin, aka Playboy, was the driver in a shooting. In a series of unusual encounters, Frank ends up hiring Calvin as his assistant. He needs a front man to make contacts and get inside the “hood” where the shooting took place. As they head toward an unhappy resolution of Tony’s case, we watch their mutual distrust slowly evolve into a solid working relationship.

It’s all done with a sense of place second only to the work of George Pelecanos, with dialogue to match. Frankie Marr is the most likable anti-hero in current crime literature, and it’s a pleasure to know that he’ll have a new sidekick to banter with, in the next installment of this promising series.