Putting those skills to work

It’s so nice to have Bob Moyer busy reviewing books again. Now, if we can just keep him from gallivanting around the world for a while…. 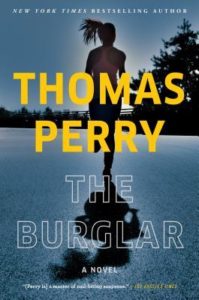 Thomas Perry sure knows how to keep his readers turning the pages. He’s used the same formula to great success in his last three stand-alone mysteries — create an engaging character with an unusual skill set, put the person in peril, and make him or her use that skill set to get out of it. The Old Man, an ex-CIA agent, used his skills to infiltrate the country and the very house of his nemesis to stop the attempts on his life. The chief of the bomb squad not only had to defuse the bombs; he had to get inside The Bombmaker’s head. Now comes The Burglar, who can walk a beam, scale a wall, slip through a doggie door, climb through a transom and hide in a kitchen cupboard. Five-foot-two in jogging shoes, with a ponytail, The Burglar is a she.

The only thing she can’t do is shake the shadowy characters trailing her in big black SUV’s. They come at her relentlessly after she discovers three dead bodies in a house she was burgling. The killers picked up her trail when she returned a video she found at the murder scene. Whichever way she turns — and she has many ways to turn — they are on her. It is not until she stops, makes a stand and taps her skill sets, that her fortunes change.

Using her surveillance skills, and her ability to slip in about anywhere, she accumulates enough information to piece together the crime that induced the killings. While she uses her intelligence to put together a case against them, she also has to dodge them. Perry keeps the readers on the edge of their seats by keeping The Burglar in constant peril.

And that is Thomas Perry’s skill set.

This entry was posted in Mysteries, Thriller/Suspense and tagged Mystery, Thomas Perry. Bookmark the permalink.