The ties that divide

SPYING ON THE SOUTH: An Odyssey Across the American Divide. By Tony Horwitz. Penguin Audio. 17 hours; 14 CDs. Read by Mark Deakins. $45. Also available in print from Penguin Press. 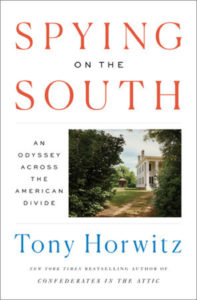 We have lost a fine and accomplished journalist and writer with an inquisitive and open mind, a disarming humility and an admirable sense of adventure.

Having spent most of my life as a journalist, I came late to reading nonfiction for pleasure. When I wasn’t working with the news of the day, I wanted to escape through fiction. Only when I began listening to audio books did I develop an interest in and enjoyment of good contemporary nonfiction. That’s my excuse for not having read any of Horwitz’s previous books, most notably “Confederates in the Attic,” published in 1998. That’s part of the reason I wasn’t prepared for what I found in this book.

When I started listening to the audio version of Spying on the South, I was quickly caught up by Horwitz’ account of having roughly followed the trail of Frederick Law Olmsted, who later designed New York’s Central Park, through the South in the 1850s. Olmsted, then a restless young man unsure of what he wanted to do in life, was trying to understand the South when the nation was on the brink of the Civil War. He wrote dispatches for The New York Times under the name Yeoman, some of which later grew into books.

Horwitz was trying to understand the South – or parts of it – long after that war was over (or was it, really?), in the months leading up to the 2016 presidential election.

The book is entertaining, even funny at times, as Horwitz recounts his travels, including on a coal towboat, a tourist riverboat and a mule, and his encounters with ordinary people in all sorts of places. It is also depressing, as Horwitz describes how racism and prejudice still poison our society, and how America in many ways has failed to live up to its ideals and to realize what seemed unbounded opportunities in those pioneering days.

While I enjoyed the book and found it well worth reading, I also found it frustrating.

I can forgive the ways Spying is rather disjointed, a hodgepodge of several types of book.  Horwitz, it seems, was rambling through parts of the United States in more ways than one. The result is a book that’s something of a travelogue; an amusing adventure shared, for a time, with a friend he describes as an “Australian Jon Stewart”; a sobering look at racism, the legacy of frontier mentality, and the deep divisions within America; an interesting look at the life as well as the work of Olmsted; and a good bit of history of the regions Olmsted wrote about.

All these disparate strains work together in Horwitz’s mild-mannered, open approach.

No, what frustrated and disappointed me about the book was that Horwitz included in his ramblings so little of the South I know, live in and would love to understand better.

Having decided to read the book on the basis of the title and the publisher’s description, I was sorely disappointed that Horwitz for the most part ignored the Old South, where slavery in America got its start, the part of the South my ancestors settled and the part where I’ve spent most of my life.

He retraces Olmsted’s travels through West Virginia, on the Ohio River, in Kentucky and Tennessee and eventually into Mississippi and Louisiana. He spends a big chunk of the book in Texas and ventures into Mexico.

All these travels provided good material, but I felt cheated because Horwitz omitted so much of the South I’m familiar with. Toward the end of his book, when he’s wrapping things up after the long sojourn in Texas and heading for a conclusion, Horwitz mentions that Olmsted spent a summer traveling through upland Mississippi, Alabama, Tennessee, North Carolina and Virginia.  But all that merits one sentence.

Elsewhere, Horwitz talks about the irony of Olmsted, after having devoted so much of his life to creating parks to be “democratic spaces” for all, designed the Biltmore Estate mansion in Asheville, the largest private home in America, as his last big project. Nonetheless, North Carolina gets short shrift in this book.

My problem is mostly having had the wrong expectations. The parts of the South he writes about are interesting, but they hardly cover what I’d call “The South.” Maybe if the book had been titled “Spying on Texas and the Western Edge of the South” I wouldn’t have been disappointed.

But that’s my problem, for the most part. The book is well worth the read, or, with lively narration by Mark Deakins, the listen.

And I wish Horwitz were around to write another.