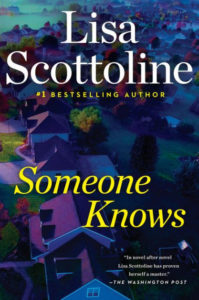 Lisa Scottoline has written more than 30 novels, been on best-seller lists forever and won lots of big awards. She was a lawyer in Philadelphia before she was a writer, and many of her books are legal thrillers.

Somehow, I’ve never read any of her books until Someone Knows came my way. This is one of her standalone thrillers, although by the end lawyers are involved.

For this story, she takes us to Brandywine Hunt, an upscale housing development in Pennsylvania, built on what used to be horse country and with equine-related street names. It’s the kind of place that people aspire to, a place with some prestige, where you know you’ve “made it” if you manage to acquire a home. Of course, within the development there are degrees of luxury; some have “made it” more than others.

It’s also the kind of place that’s supposed to be safe. But in this setting, five teenagers, not even old enough to drive, manage to get into a terrible situation when a “prank” goes very wrong. One of them winds up dead, but because of the circumstances, the other four are able to keep their involvement secret.

At the time, they fear that if anyone discovered their part in what happened, it would be the worst thing that could possibly happen to them.

Twenty years later, on the anniversary of the incident, another of the group dies a violent death.

Allie Garvey, one of the original five, heads home for the funeral of her long-ago friend. Other than keeping up with them on Facebook, she’s had nothing to do with any of the others since the night that changed everything.

She’s learned that being found out isn’t the worst that could happen. Living with a guilty secret for 20 years has wrecked her life. Because society didn’t punish her for what she did, she’s punished herself, and there’s no end to the sentence. Now her marriage is breaking up because her habits of secrecy are driving her husband away.

Allie dreads meeting the other two survivors among the teenagers who were with her that night. They are the only other people who know the secret, and she’s convinced it shouldn’t be kept secret any longer.

As it turns out, she was right to dread the reunion, but she had no idea of the enormity of the chain of events and revelations that would be set into motion.

Scottoline tells the story through points of view shifting through several key characters, with the cast changing as the story moves along – and some people die. Through these characters, we see what happened 20 years earlier, what led up to it and the aftermath.

Then we see how events play out leading up to the final reckoning.

There’s lots of suspense in both halves of the story. There are plenty of twists, turns and surprises, at least one of which at the end seems almost too surprising, to the point of not being entirely convincing.

Overall, though, this is a well-told thriller. One of its themes is that appearances are deceiving, and those upper crusty houses in the suburbs harbor plenty of ugly secrets. Another theme has to do with the damage that keeping secrets, especially guilty secrets, can do. And we come to see that the law, what we call justice and what is right are not always the same.

Scottoline’s handling of the technological advances over the two decades the story spans isn’t obtrusive, but it’s interesting.

I listened to the audio version while driving various places, and I’ll admit that this is one of those books that sometimes make me take the long way to wherever I was going, convinced I am on the verge of some action or revelation. It would be good entertainment for summer travels.