“Not a mystery” was the subject line on the email in which Bob Moyer sent me this review. He knows that I know that most of his reviews are of mysteries, especially detective stories. But I also know that Bob has diverse interests, a lively intellect and a big heart, so I’m not really surprised that he read, and loved, this nonfiction book. 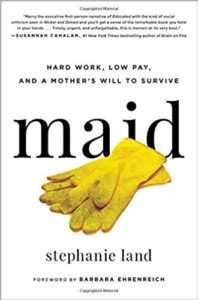 Pubic hair. Author Stephanie Land mentions it more than once, to make sure the reader understands the degradation a Maid faces daily, cleaning up the disgusting detritus of her clients. Bathrooms in general play a large part in her life. It’s the most difficult room to clean, and Land prides herself on the skills developed to do it right. She also suffers injuries there, weakening her arm from scrubbing so hard, and her back from leaning over. The bathroom also becomes a haven, where she may retreat from the owner, or just weep over her distraught situation.

Land lived for real the life Barbara Ehrenreich lived for the purposes of her book, Nickel and Dimed, in which she played a low-wage worker. A mother out of high school, the author had to fight for custody of her child with no help from her parents or grandparents. She had to jump through hoops that made her feel at each step she wasn’t worthy while being told she was lucky. She stayed in relationships just because she could not afford a place for her and her daughter. People called out “You’re welcome!” in the checkout line when she used food stamps and WIC coupons. Going hungry, she ate oatmeal while her daughter got the proper food. When she finally was able to move into a place out of transition, she ended up in a hellhole with black mold that kept her and her daughter in ill health. Worst of all, no matter how hard she worked, there were not enough hours in the week to clean enough houses to make enough money to get out of her situation — even with the aid she could generate.

That’s the strength of this book, the thread that keeps it from being a litany of bitterness and woe. From an early age, Land wanted to be a writer, and that passion survives her suffering. Taking online courses to further her education, she writes almost feverishly about her life, revealing late in the book that she kept an online blog that had many followers.

Her perseverance pays off, as she uses her ambition and skill to leverage her way out of Washington state into college and a degree. Along the way, she also gains the insight that wherever she was, and is, is home. The effort and will to have a home, made a home for her and her daughter.

Land has articulated the difficulties millions of people in America face in their lives, and how she rose out of them. Her book leaves us to question: What about those who cannot articulate, cannot leverage, cannot rise out of the trap of poverty?