Flavia on the case(s) 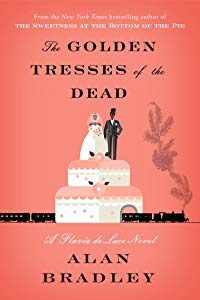 A new novel starring Flavia de Luce, the precocious young English girl who uses her extensive knowledge of chemistry and her nosiness to help her solve a remarkable number of crimes in or near her sleepy but often deadly village, is always a cause for celebration.

Flavia, who’s 12 now, has seen a number of changes since the series began. Her mother had died in mysterious circumstances when Flavia was a baby, and now her father, who never really got over either his wife’s disappearance or his terrible experiences in World War II, has also died, leaving Flavia an orphan.

Despite threats to the contrary from various quarters, Flavia is continuing to live at Buckshaw, the crumbling mansion that now belongs to her. Her companions are the two older sisters who have long persecuted her; her annoying younger cousin, Undine; Mrs. Mullet, the cook; and Arthur Dogger, who served in the war with her father and came home with him to be his valet.

As the latest entry in this delightful series opens, Flavia’s oldest sister, Ophelia, is finally getting married to Dieter Schrantz, the former German pilot who was shot down by a Royal Air Force pilot and stayed on in England after the war. It’s now the early 1950s.

Flavia and Dogger have recently decided to put their considerable skills to good use by opening an investigative agency, Arthur W. Dogger & Associates, with Flavia being the associates. To their surprise, in quick succession they find themselves with two challenging cases. The first is thrust upon them when, at the reception at Buckshaw after the big wedding,  Flavia discovers a severed human finger stuffed into the wedding cake. The second arrives in the form of one Anastasia Prill calling on them to ask for their assistance in the theft of threatening letters dealing with the work of Miss Prill’s father, the well-known homeopathic practitioner Dr. Augustus Brocken.

Dr. Brocken is now elderly, incapacitated and a resident at Gollingford Abbey, a nursing home.

The “who” of the severed finger is fairly easily discovered – the finger, which had been embalmed, belonged to a recently deceased woman who was a famous guitarist. The why and how are not nearly so apparent.

And then Miss Prill turns up murdered at her home, bringing the disapproving local constabulary into Flavia and Dogger’s case.

Throw in two women missionaries who have been toiling in Africa but are now guests at Buckshaw, thanks to the vicar’s wife, some mischief on the part of Undine, and – could it be? – a hint of a love interest when Flavia befriends Colin Collier, the son of the late guitarist, and you’ve a book that’s every bit as lively and entertaining as fans of Flavia would expect.

The books starring Flavia are always delightful. She’s quite precocious but also endearingly naïve in some ways, and her first-person narration is often very funny, though delivered in earnest seriousness. The mysteries are usually interesting, even if sometimes a little far-fetched, but  then you don’t read Flavia de Luce books just to find out who done it. You read them to be amused and entertained in a wholly original way, and because you have come to love this lonely but spunky little girl, now on the verge of becoming a young lady.

I usually read the print version because I can’t wait, and then listen to the audio book mostly for the great pleasure of hearing Jayne Entwistle give perfect voice to Flavia, one of the most interesting, sometimes maddening but always lovable characters you could ever hope to meet.