Bob Moyer keeps trying to catch up on all the books he’s read and intends to review, but there are so many ways to have fun and put off writing. … 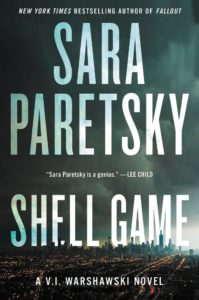 Over the course of 17 novels, she’s been beat up, tied up, drugged, kidnapped, chained, mugged, thrown into the trunk of a car, thrown out of a car, you name it. In spite of it all, however, P.I. V.I. Warshawski is in pretty good shape.

That’s because she runs. And practices resistance training. In her latest adventure, she runs after muggers, away from thugs, to catch an elevated train, with her dogs, and late to appointments all over Chicago. She also resists intimidation by a sheriff’s deputy and death in a fire, as well as being knifed by muggers and offended by immigrants.

The only weakness here is not her fault; it’s Sara Paretsky’s. The author attempts to meld two plot lines through coincidence. Now, any good mystery benefits from some coincidence. Paretsky comes up with enough of the substance for two or three novels.

One plot concerns the theft of Mideastern artifacts from archaeological sites; the other plot concerns the nieces of Vic’s (as the intrepid dean of female P.I.’s is called) former husband. They come from Portland and out of left field into a Shell Gamethat involves international corporations. Vic gets involved when one of the nieces disappears after attending a corporate weekend at an island resort. At the same time, the Canadian grandson of her dear friend and physician is implicated in the murder of a man who possibly smuggles artifacts. The author spends a lot of time spinning a web of coincidences to twine these two lines together.

Fortunately, she’s a genius, as author Lee Child says. She keeps the action and wit moving as fast as always, and the usual amenities obtain — her downstairs neighbor, Chicago setting, political rants and good places to eat when you visit the Windy City. She also manages to dig up a new boy friend, an archaeologist involved with the objects at the heart of the story. It’s another great story of bad people in the world, up against a good detective — who happens to be a woman.