A book for those who love books, bookshops and mysteries

I somehow misplaced this review when Bob Moyer submitted it last fall. He politely nudged me to find and post it.  And now I won’t rest until I have the book. 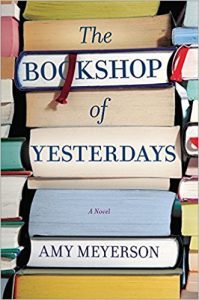 Some books are scary.

Not Halloween or Stephen King scary, not even Nicholas Sparks scary. Scary because just as you settle in with a satisfying cast of characters, a comfortable setting and a good narrative flow, a suspicion surfaces — will the premise behind all this hold up? Will the resolution undermine this good feeling? In other words, will the sum be as good as the parts?

This book is one of those books. Miranda, who hasn’t seen her uncle since she was a child, flies home to his funeral in L.A. She had received a copy of The Tempest and a card that says Understanding prepares us for the future just before she left. She associated it with the scavenger hunts her uncle set up for her to learn different lessons. After the funeral, she learns that he left her his bookstore — Prospero’s Books. It’s a pre-gentrification landmark in Silver Lake, just below Griffith Park. It’s been there a long time, but apparently not much longer — it’s saddled with debt. She decides to stay, to try to shore it up, to at least sell it. It’s a place that makes any booklover feel at home, with books chosen to suit the owner, not the customer; with a manager who avoids hard financial questions; customers, including a retired doctor and a screenwriter, who hang out all day; and a tatted-up barista who has been there almost as long as she is old,

At the same time, Miranda follows the clues her uncle has set up, a literary scavenger hunt that leads her through the works of writers including Hemingway, Austen and Erica Jong, as well as Shakespeare. Like the games he set up for her as a child, these clues are not just clever verbal ones. They are contextual clues that force her to examine the setting, the subject matter, engaging her and the reader in figuring out just what her uncle wants her to find out — and her parents don’t.

That’s where the concern comes in. Can this question he keeps posing, that sends her across the Southern California countryside, have a big enough “reveal” to justify the time and commitment Miranda and the reader put into the quest?

The answer is yes. Besides being a bookstore-lover’s delight, the book pays off with a nicely unwound mystery that keeps the reader engaged right up to the denouement. And that is?  Well, you’ll have to visit The Bookshop to find out. Don’t expect anything but a grunt from the manager. And don’t forget to tip the barista.