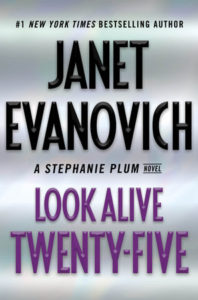 You’d think Evanovich would run out of crazy ways for Stephanie to get into trouble as she pursues the criminals who have run out on the bail her cousin Vinnie provided them. But her fertile imagination comes through again in “Look Alive Twenty-Five.”

Through a series of circumstances including her habitual shortage of money and Cousin Vinnie’s deal-making, Stephanie suddenly finds herself managing the Red River Deli in Trenton. Lula, the colorful former ho’ who’s her sidekick in the bond enforcement business, joins her with enthusiasm. After all, what’s not to like about a job that includes free food?

As it turns out, there’s a lot not to like, starting with the fact that Stephanie’s three most recent predecessors as deli manager have disappeared mysteriously, in quick succession, leaving only one shoe behind.

As the disappearances continue, Stephanie finds the two men in her life, her boyfriend, Joe Morelli, a homicide detective who’s working the disappearance cases, and Ranger, the mysterious and very sexy head of a security company with whom she has a – shall we say? – complicated relationship, teaming up to make sure she and her shoes are safe 24 hours a day.

Stephanie’s running pretty ragged trying to keep the deli functioning while pursuing her bail-jumpers as time allows. As usual, there are always unexpected complications surrounding the people she’s trying to haul into court, complications such as feral chickens and cat kidnapping.

After an employee Ranger assigns to protect Stephanie becomes one of the half-shod kidnap victims, Ranger, Stephanie and Morelli are all united in the quest to find out who’s doing the snatching, and why.  Oh, and Wolf, the man (or is he really human?) who appears from time to time in her locked apartment and then vanishes in a puff of smoke, is also involved in the quest. The stakes get higher as some corpses start to appear.

And Stephanie’s balancing act gets even more challenging when the disappearances and Lula’s unorthodox waitressing and sandwich-making talents turn the deli into a social media sensation.

Then there’s the breakfast burrito food truck incident. But really, there’s no need for spoilers. If you’re a fan of Stephanie’s grab this book. If you’re not, why not?

As always, Lorelei King does a terrific job of bringing the story to entertaining life in the audio version.  Her range of voices and accents is amazing.