Bob Moyer has visited my territory, reviewing a new novel set in coastal North Carolina. I’m glad he did. I’m eager to read this one myself. Now if we could just get Bob to come visit these marshes in person… 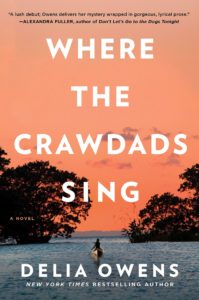 Delia Owens did not write a North Carolina novel; she created a North Carolina marvel. She has dovetailed into a single book a coming of age novel, superb nature writing, a love story, a survival tale, a murder mystery and a courtroom drama, all set in the coastal marsh of North Carolina.

Out yonder, where ships crash “like paper hats,” an abusive man, damaged by World War II, moves his family into a ramshackle cabin. One by one, the family escapes, leaving the youngest child, Kya, alone with him. She survives “…like a minnow. Just keep out of the way, don’t let him see you, dart from sunspots to shadows.”  When Kya is only 10, he disappears as well, leaving her where the crawdads sing, “…far in the bush where critters are wild, still behaving like critters.”  Avoiding authorities “like a minnow,” she learns “…wonders and real-life knowledge she would’ve never learned in school— “The marsh became her mother.”

Into this world enters a boy, Tate, who encounters her just as her body shows “…inklings and foothills of womanhood.”  He provides her companionship she has never known, and the ability to read. During the time they spend together, her reading articulates what she carries in her blood and bones — the forces behind the deceptive flicker of fireflies that devour their own, the disguises that inferior males take on to prey on females and how a mother can leave her children.

Tate leaves her as well, but she has more than knowledge from her reading as solace — she has poetry to manifest her solitude. Quotes from Emily Dickinson, Galway Kinnell, and a woman named Amanda Hamilton punctuate the text. “I didn’t know a sentence could be so full,” she gasps when she first reads a poem. Indeed, the same can be said of the author’s writing. She fills the pages with lyrical phrasing:  “Death’s crude pluck, as always, stealing the show; “He whispered his hands against her inner thighs;” “I know feathers,” Kya says to Tate.

At the center of the book lies a murder that colors the narrative as it moves back and forth from the investigation and Kya’s backstory. Colors, informs, but does not distract — it is only a piece of the questions Kya encounters in her exploration of how “Some parts of us will always be what we were, what we had to be to survive way back yonder.”  The culminating courtroom drama develops with exceptional tension, leading a character to burst out when the verdict arrives: “Would somebody read it to us!”

What happens in the conclusion may not surprise you, but how it happens will. Most likely, it will send you back to re-read sections of the book, to savor in a new light what already was remarkable. Where The Crawdads Sing is a fine place to visit, and then reflect.