Bob Moyer takes a look at the latest Spenser novel and finds it worthy of the tradition. 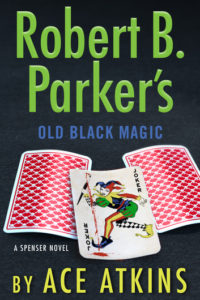 Spenser, the singularly named Boston P.I., shares both a name and a proclivity for poetic expression with the 16th century poet, first name Edmund.  Spenser’s been quoting and quipping ever since he replied to a beefy guy’s threats in The Godswulf Manuscript, “Be still my heart.”

In this latest book, when a gangster’s lawyer tells him he has to meet the boss in a particular place, Spenser replies, “I’m so excited.  I just don’t know what to wear.” The caustic comments have been consistent through 47 books.  What hasn’t been consistent is the author – Robert B. Parker wrote the first one, Ace Atkins the last one.  Atkins was anointed by the Parker estate to keep the franchise going upon Parker’s demise, and he’s done a remarkable job. Spenser still keeps in topnotch shape at his favorite gym, and stops just shy of being bulletproof.  He continues to prowl renowned Beantown dining spots, and he cooks the occasional gourmet meal for his main squeeze, Susan.  The two of them, as always, steam up the pages, but all the sex, keeping with tradition, happens between chapters.  Best of all, Atkins and Parker both belong to the Elmore Leonard Don’t-Write-the-Words-People-Don’t-Read School of Writing.  A Spenser novel sails right along.

In Old Black Magic, Parker is approached by a respected detective at death’s door.  Twenty years ago, an El Greco painting was stolen from the Winthrop Museum, a fictional museum modeled after Boston’s Gardiner Museum, where a similar heist took place.  It appears the painting has resurfaced.  As a favor, Spenser, who considers a Kane’s donut from nearby Saugus a work of art, takes the case.  He moves into the milieu of art world highlifes and underworld lowlifes searching for the painting.  Just when he thinks he’s located it, it disappears. Spenser spends the rest of the story playing a game of Mafia musical chairs, assisted by new crony Vinnie, a good bad guy.  With his help Spenser takes on the bad bad guys, cracking wise and skulls while quoting Shakespeare along the way.

It’s the Shakespeare quotes that mark Atkins’ mastery. They come with the same reflexive skill as the quips, throwing light from another time and temperament upon the mortal coil Spenser moves in.  No one, particularly Spenser, comments upon his penchant — except Susan.  And she nails it when she points out that no other detective quotes the Bard with such abandon.  It’s one of the things that appeal to her.

And to us, after all these years.  Cry havoc, and unleash the next book!