Dancing to a different beat

I love most of Anne Tyler’s novels, but Bob Moyer thinks her books appeal to the bourgeoisie. He even singles me, his editor, out as part of that bourgeois fan club.

My response would be, so what? I like Anne Tyler’s writing because yes, she writes about ordinary people, and in the end, there may not be a huge surprise, but there are so many small surprises along the way. She shows us that ordinary people are not really so ordinary, or perhaps a better way to say it is that each ordinary person is full of his other own flaws, quirks and eccentricities. Tyler is particularly good at conveying those eccentricities, with humor and sometimes pathos.

Bob is right that most of the men in Tyler’s latest novel are not particularly sympathetic, but that’s certainly not the case in all her books.

At any rate, below is Bob’s review of Clock Dance.

And, for contrast, here’s a link to my review that ran in the Greensboro News & Record. https://tinyurl.com/y7to65xk

Read the book and see what you think. 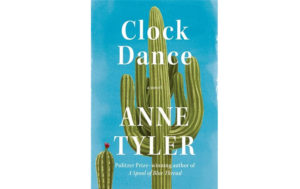 It’s not hard to understand why Anne Tyler’s books are so popular. Her writing reads effortlessly, which suggests she puts a lot of effort into making it that way. She also writes with great empathy and detail about ordinary people doing ordinary things, and that’s extraordinary

Clock Dance stands up as an excellent example of her work. Willa Drake leads a life common for women in the mid 20th century, quitting college to get married and have a family, giving up the possibility of being the linguist she showed talent for. She does finish the degree, but ends up teaching public school. She loses one husband but picks up another one much like the other one. Like a gifted child, she knows what everyone – except herself – wants, and she gives it to them.

Until the phone rings one day. It’s a desperate neighbor of her son’s ex-girlfriend, calling because the girlfriend has been shot, and the woman can’t care for the daughter, she found this number on the wall, could Willa come help?  On a whim, she does.

That puts Willa on a plane to Baltimore, familiar Tyler territory, and on a path to what the book jacket describes as “self-discovery.”  Tyler drops her into a familiar cast of characters, both vivid, endearing, and so recognizable—the gangly kid down the street in the stocking cap, the retired doctor who still sees patients at home but keeps losing his cat, the precocious daughter who mothers her mother more than her mother mothers her. There’s nothing not to appreciate, if not like, about the neighborhood. The only characters not sympathetic here are the males, who fit the definition of straw men if ever there were any in a novel. Not perversely patriarchal, they nevertheless represent the forces that have dominated Willa’s life. Therefore, it is no surprise when Willa’s “self-discovery” leads to a change in her life, as she decides to dance through the hours, not move quietly through them.

That lack of suspense brings up an argument sometimes put forth about Tyler’s work — it’s good, not great. The focus on the ordinary leaves her open to the pedestrian argument, and, indeed, she gives her bourgeois audience what they want. As Jean-Paul Sartre said about the French bourgeois theater, the bourgeoisie pays to see themselves on the stage. As described before, she does that well, and the bourgeoisie (including my editor) loves Tyler. Unfortunately, Sartre’s other lament about the bourgeois theater applies here—it’s like watching an arrow hit a target you know it was headed for all the while.

Although Willa changes, it’s not a surprise, or transformation. If that is not a requirement in your reading, Clock Dance should satisfy you. No one writes an Anne Tyler novel better than Anne Tyler. Only time will tell if her work endures.