Saving the world, once again 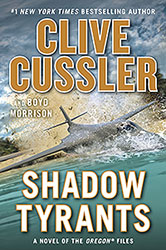 This latest in the Oregon Files books by Clive Cussler and Boyd Morrison offers, in addition to the usual action and drama, food for thought: Are computers – and especially artificial intelligence – good or bad for humankind?

As fans of this Cussler series (one of many) know, Juan Cabrillo and the rest of his secret “Corporation” roam the seas on the Oregon, a high-tech research ship disguised as a decrepit tramp freighter, ready to help the U.S. government  when the government can’t officially get involved in some tricky situation.

Things get interesting and dangerous quickly when the Corporation gets in the middle of a struggle between two factions of the Nine Unknown Men, a powerful, secretive group dating back nearly 2,000 years to an emperor in India who came to see the error of his ruthless ways.

To keep any one person from becoming too powerful, the emperor divided essential knowledge among nine men.

Through the generations, these men and their chosen descendants have passed on those secrets, and they have gathered from time to time for meetings. The descendants of the nine have become wealthy and powerful, each using his special knowledge to build an empire in some related field.

Just as the majority of them are joining forces in a way that goes against all the intentions of the ancient emperor, at least one of them is bent on making sure their plans don’t come to fruition.

Unfortunately, both factions turn  out to have ideas that the Corporation believes could be devastating for the fate of the world. Would it be worse to have a supercomputer powerful enough to take over the world, or worse to have satellites that can wipe out technology as we know it?

With teams heading out in various directions, the Corporation’s members find themselves in a variety of perilous situations as they try to save the world.

Scott Brick does his usual outstanding job of reading the fast-paced book, keeping the suspense strong in a matter-of-fact sort of way.

And as usual, Clive Cussler and company deliver a well-crafted, imaginative, entertaining story.