Not easy reading – but important

Tom Dillon, a veteran journalist, reviews two books that offer serious food for thought – one an investigative examination of Donald Trump’s business dealings with Russia, and the other a primer on dealing with tyranny.

There are no two ways about it. These books are going to make some people really angry. Others are going to be skeptical, and still others will dismiss them entirely – whether they take the time to read them or not.

Trump/Russia, in the classic mode of good investigative journalism, is an exhaustive survey of Donald Trump’s business career and the overseas alliances that he developed during it. It’s not easy reading. There are so many characters and offshoots and subplots that one might think he is, with Alice, down some sort of rabbit-hole.

There’s much about Donald Trump’s casino failures in the 1990s and how “dark sources” – Russian money – brought about decades of deal-making with people all over the world, some above-board and many others not.

Indeed, along with Vladimir Putin, the Russian “mafiya” – they spell it with a “y” – is a big part of this book. Seth Hettena quotes one unnamed researcher here as saying, “Whenever you’re offered a lot of money, better save some for legal fees.” It’s advice well taken. There’s much more about underworld figures who took up residence in New York’s Trump Tower.

Along the way, the stories range from Paul Manafort’s grooming of a pro-Russian Ukrainian politician to remove his rough edges to the throwing of the ice-skating competition at the Salt Lake City Olympics in 2002. That was the result of collusion between Russian and French judges.

Then there’s the attempt of an Azerbaijani real estate mogul to promote the career of a little-talented singer through the 2013 Miss Universe pageant – in a chapter titled “Mister Universe.” Trump tweeted, “Do you think Putin will be going to the Miss Universe Pageant in November in Moscow? If so, will he become my new best friend?” Putin apparently didn’t go.

Hettena is a long-time investigative reporter for The Associated Press who earlier wrote Feasting on the Spoils: The Life and Times of Randy ‘Duke’ Cunningham, History’s Most Corrupt Congressman. For this book, he has talked to many people and perused an exhaustive list of documents and both published and unpublished reports.

The publisher calls the book “an expansive and essential primer to the Trump/Russia scandal.” And it’s a worthy read with good notes. Hettena, citing past investigations such as Bill Clinton’s Whitewater and Richard Nixon’s Watergate, predicts the Trump/Russia controversy is going to be around for quite a while. 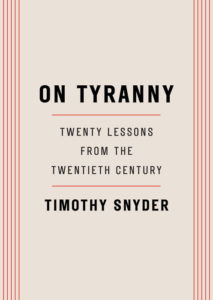 The second book is a small – 126 pages – expansion of what was originally a Facebook post. In the book, which you can probably read in less than an hour, Yale University historian Timothy Snyder observes that Americans today “are no wiser than the Europeans who saw democracy yield to fascism, Nazism, or communism in the Twentieth Century.”

“Our one advantage today is that we might learn from their experience,” he says, and he posts 20 lessons, along with commentary. No. 1 is “Do not obey in advance. Most of the power of authoritarianism is freely given.” No. 2 is “Defend institutions,” and No. 3 is “Beware the one-party state.”

There’s not enough space here to list all 20 lessons, but some important ones are No. 6, “Be wary of paramilitaries,” or No. 10, “Believe in truth,” or numbers 15 and 16, “Contribute to good causes” and “Learn from peers in other countries.”

Snyder’s last three lessons are perhaps the most touchingly heart-rending in the book.

“Be calm when the unthinkable arrives.” (Remember Sept. 11.)

“Be a patriot. Set a good example of what America means for the generations to come.”

“Be as courageous as you can.” Snyder concludes, as part of that last lesson, “If none of us is prepared to die for freedom, then all of us will die under tyranny.”