Mystery and history, with a nod to Agatha Christie

THE PRISONER IN THE CASTLE. By Susan Elia MacNeal. Books on Tape. Read by Susan Duerden. 10 hours; 8 CDs. Available in print from Bantam. 300 pages. 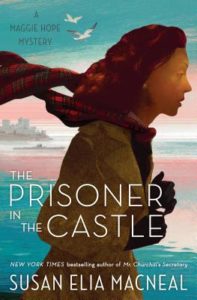 Through eight novels now, Maggie Hope’s adventures have given readers a thoroughly enjoyable World War II history lesson wrapped up in lively mysteries with a spunky, red-haired heroine who is also a mathematician and code-breaker.

Hope, who grew up in America but has British heritage, finds herself in London as the war heats up and takes a job as a typist in Winston Churchill’s office. From that humble beginning, this intelligent and determined young woman works her way into all sorts of adventures that, fortunately for us, allow her to rub shoulders with a number of key figures from history and experience the war in England, the United States and behind the lines in Europe. We’ve seen her with the British princesses and Eleanor Roosevelt, and we’ve watched her train to be a spy and put her sometimes deadly skills to work. She’s tangled with Goebbels, Goering and other top Nazis.

This time, author Susan Elia MacNeal tries something different. The Prisoner in the Castleis a fun book in a different, rather old-fashioned sort of way.

For prospective new fans of the series, a word: It is better to read the books in order. The war progresses, of course, and so do developments in Maggie’s life, both professionally and personally. Each book is a good story on its own, but if you haven’t read what came before, a number of references will leave you wondering, and you won’t have a full understanding of what things mean to Maggie. 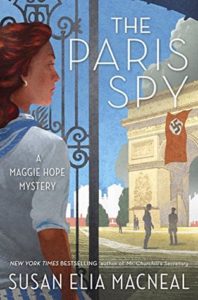 With that in mind, I had to catch up by reading the seventh installment, The Paris Spy(Bantam, August 2017), which I had somehow overlooked during the confusion of a move last year. In that book, Maggie and some of her good friends are working undercover for the British Special Operations Executive in occupied Paris. After harrowing operations in which she helps secure reports vital to the coming D-Day invasion and deal with dangerous betrayal, she winds up in the situation in which we find her as the eighth novel opens.

In the newest book, Maggie is now a secret prisoner of the British government on a remote island off the coast of Scotland where spies who know too much or are otherwise deemed no longer suitable for field work are held, without any contact with their friends, family and former colleagues.

Until now, boredom and frustration have been the prisoners’ biggest problems. They live in comparative ease in a mansion that was built as a hunting lodge, with servants to wait on them. But one night, one of their number drops dead while finishing his after-dinner drink.

And after that, in alarmingly quick succession, more of the inmates, along with some staff and visitors, begin to die in mysterious circumstances. Since nearly all the prisoners are highly trained killers, they cannot help but suspect one another.

MacNeal gives Agatha Christie her due – the mansion’s library has a set of her mysteries on its shelves, and one of the prisoners mentions having just read the book we now call And Then There Were None, in which people invited for a weekend on a remote island off the Devon coast are murdered, one by one – as she borrows heavily from the plot of Christie’s most famous novel.

The result is an enjoyable mix of a Christie-type mystery with more about spies, the buildup to D-Day, Nazi perfidy and some thoughtful questions about how much British leaders would be willing to sacrifice in their determination to win the war.

Along the way, there are some developments in Maggie’s personal life and those of her friends.

All in all, this book is an intriguing, suspenseful change of pace that builds to what must surely be another Maggie Hope mystery in the works.

The lively plot lends itself well to the audio version, which Susan Duerden makes more fun for us American readers by supplying an appropriate range of British accents.