Women to the rescue

While I’ve been on a bit of a vacation, Bob Moyer has been keeping the book reviews coming. 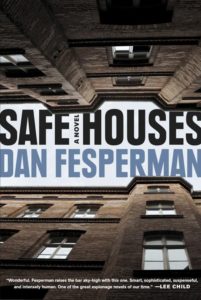 Spy novels too often teem with testosterone-driven heroes of all makes and models, particularly the male versions. It is refreshing,  then, that Dan Fesperman has centered his story on an under-recognized, under-represented group: women.

In 1979, Helen Abell joins the CIA, only to be dispatched to Berlin, where she is consigned to the lowly duty of caretaking for the Safe Housesused by agents on duty, in transit, or just in recovery.

While assiduously caring for one house, she overhears a conversation by unscheduled visitors downstairs, their conversation also being taped. A short time later, she is also caught unaware when another agent brings a woman in, and Helen steps in to stop a rape. When she tries to report him, she finds he is famous within the agency for such behavior, but forgiven because of his skill. Although she joins forces with two other women in the Company, one in Washington, one in Paris, to bring him down, she soon finds herself forced out of the agency and on the run.

Fesperman moves the story smoothly between Berlin, where the story begins, and Poston, the small town in Maryland where it ends in murder. At that point, a Washington “fixer” joins Anna, Helen’s daughter, in searching out the rest of the story.

The author adroitly moves the plot along, and keeps the pages turning, by using pieces of information from the past to propel the narrative forward in the present. Every turn comes with a surprise that slips into the next adventure, always moving closer to the danger engendered in 1979. The author keeps his connections covert until he gets to the next corner. His reveal, both of the women’s skill and the spy skullduggery, is most skillful.

The book is long, but it’s a short read. Safe Houses is a safe bet.