Challenging the powerful, a reporter’s story 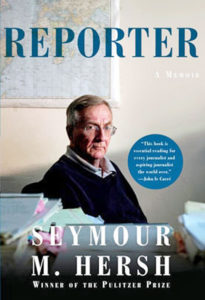 “I am a survivor from the golden age of journalism…” begins Seymour M. Hersh in his remarkable memoir, the aptly named Reporter.

On a much more modest scale, I am one of those survivors, too, and that’s one of the many reasons I found this book so interesting and rewarding.

Hersh was already a giant in journalism by the time I was starting my career. He’d won the Pulitzer Prize for international reporting in 1970 for his expose of the massacre of Vietnamese civilians by American soldiers at My Lai in 1968. When I, improbably thanks to the vision of a copy desk chief who hired and promoted young journalists, became the assistant national editor of The Sun in Baltimore in the mid-1970s, I had to deal frequently with late-breaking stories from Hersh moving on The New York Times wire.

I’d call our Washington bureau, which in those golden-age days was large and active, and ask if they could match whatever Hersh had come up with, or if I should just use his story. Bob Woodward and Carl Bernstein at The Washington Post had owned the Watergate story from the beginning, but when Hersh, in the Times’ Washington bureau, began working on it, his stories ratcheted up the pressure.

Those were heady days to be working for a major daily newspaper. As Hersh’s opening sentence goes on to describe, those “golden” days were when newspaper reporters “did not have to compete with the twenty-four-hour cable news cycle, when newspapers were flush with cash from display advertisements and want ads,” and when he was “free to travel anywhere, anytime, for any reason, with company credit cards.” He goes on to mention being able to report thoroughly on a breaking news story without worrying about coming up with something immediately for the web page, and he could have added that he was sometimes given the luxury of spending weeks, even months, pursuing a big story.

Hersh does decry, as he should, what has become of journalism as corporate owners have not responded wisely to the challenges of the Internet age, as TV “experts” offer more opinion than fact, and as “fake news,” incomplete news and hastily reported news swirls around us.

But that’s just an unavoidable observation, not what he really has to offer us in Reporter.

Nor is this the sort of memoir that offers juicy details about the writer’s personal life or soul-searching personal revelations. Hersh titles the book Reporter for good reason. It’s a memoir by a consummate professional about his professional life. In the earliest chapters, he tells us enough about his childhood in a lower-middle-class family in Chicago to understand who he is. His parents were Jewish immigrants; his father owned a dry-cleaning business in the black ghetto on the South Side. He almost didn’t go to college and dropped out of law school. Later, he mentions that he married, but he talks about his wife, and later his children, infrequently, usually not by name, and for the most part, only when family logistics affected his work in some way.

Hersh’s writing evokes the reporter’s training and instinct to keep himself out of the story – even when, as in this case, he IS the story.

The story of how he got into journalism is interesting, but, again, that’s not the heart of the book.

This is mostly a book about how one of the best investigative reporters from that golden age of American journalism got his stories and what he learned in the process, and, because he was close to much of it, it’s a story of many of the events and trends of the latter 20th and early 21st centuries that brought our country to where we are now.

Without belaboring it or preaching, Hersh reveals a deep belief in the importance of a free press in a democracy and the people’s right to know, even when their political leaders – and, sometimes, newspaper or magazine editors – don’t want them to. He was a lone wolf, even when he was on the staff of the Times or regularly contributing to The New Yorker magazine. For much of his career, he worked independently, writing books and finding others to publish his investigative pieces when the publications he usually dealt with declined.

His account is quite the recent history lesson. He was close to the centers of power and pivotal events – Henry Kissinger, the justification for the Iraq war, Abu Ghraib, the CIA and assassinations, Dick Cheney. He has a strong sense of morality and the values on which America is supposed to operate, and his beliefs helped motivate his reporting and decisions. He grew up a Democrat, but he does not hesitate to criticize and challenge Democrats when he has reason to believe they fall short.

Although he gives his account matter-of-factly, even modestly, and makes a point of saying when he believes someone’s criticism or opposition was justified, it is clear that, once on the trail of a story, Hersh was a force to be reckoned with.

Hersh has made some mistakes over his long and productive career, of course, and he mentions some of them.

He also acknowledges criticism of some of his more recent reporting, such as his coverage of the killing of Osama bin Laden. There is also, as he notes, quite a lot of criticism – with some justification – of his extensive reliance on unnamed sources.

Time has proved much of what he wrote earlier, some of which was widely disputed at the time, to have been right, and he seems content to let history judge his more recent work.

This book is well worth reading for those of us who also participated in journalism’s golden age, and for anyone who wants a more thorough understanding of recent American history. Even more important, it should be required reading for those who aspire to be journalists, those often despised guardians of the people’s right – and responsibility – to know what’s going on in their government.

“I’ve spent most of my career writing stories that challenge the official narrative, and have been rewarded mightily and suffered only slightly for it. I wouldn’t have it any other way,” Hersh concludes. Well done.

I have both the audio and print versions of the book. Arthur Morey’s reading of the audio version of this first-person account is so convincing, so right, that if I ever have the privilege of meeting Sy Hersh in person, I’ll probably think his voice sounds wrong. The print version has a useful and extensive index.