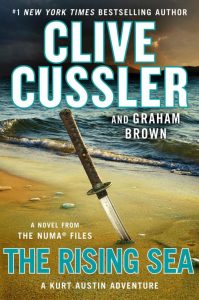 No. 15 in the NUMA files books is everything fans have come to expect from Clive Cussler.

The Rising Sea is a fast-paced thriller, with lots of action and danger. There are some unexpected developments, some evil villains, a plot that strains credulity at least a little – but in an entertaining way. As a bonus, there’s a lot of interesting scientific information, and a bit of ancient legend. That the story is set firmly in the world of today or maybe tomorrow only makes it more credible.

Kurt Austin, Joe Zavala and the rest of the crew at the National Underwater and Marine Agency are studying the alarming pace of sea rise. The rise has accelerated beyond what can be explained by climate change and glacier melt, to the point that many areas of the world and billions of people could face imminent danger.

When their research alerts them to problems associated with a mysterious underwater mining operation in the East China Sea, they set out to investigate.

They quickly run afoul of an international plot to upset the balance of power in the Pacific, and Chinese conspirators who rely on both cutting-edge technology and a ruthless assassin.

Kurt and the NUMA team face grave danger in Japan, Shanghai, on and under the seas and on a secret artificial island as they race to try to save the world.

This is an exciting, interesting and sometimes surprising tale, one of Cussler’s best. Sure, the NUMA books, like all those in his publishing empire, follow something of a formula, but only in the broad sense. Each story is new and laced with fascinating information. If it’s a formula, it’s a formula for successful entertainment.

Scott Brick, as always, reads with the perfect tone and timing, not adding any unnecessary, artificial drama to Cussler’s dashing tale.The Rising Sea makes a fine vacation read, and the audio version would be a great way to enliven a drive to the beach – where, we hope, the sea level won’t have risen too much.