Lies and other tangled webs 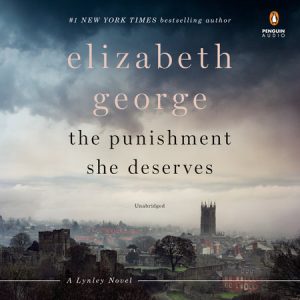 It’s been 30 years since Elizabeth George’s first introduced us to Detective Inspector Thomas Lynley, in A Great Deliverance, her widely praised debut novel. It’s been three years since her most recent novel, A Banquet of Consequences, was published. Over the decades, Lynley and the series have had their ups and downs, including a bleak, dark stretch when Lynley’s pregnant wife, Helen, was murdered, and then both he and his inimitable sidekick, Detective Sergeant Barbara Havers, seemed bent on self-destruction.

Now there’s good news and more good news. There’s a new novel out starring Lynley and Havers. And The Punishment She Deserves is one of the best ever in the series. A Banquet of Consequences, the 2015 novel, was the most enjoyable one in a while, with Lynley back in good form and even Havers more or less behaving herself.

The Punishment She Deserves is even better, a well plotted, complex novel that’s both thought-provoking and highly entertaining.

Havers is still on a short leash, and it’s obvious that the higher-ups would be delighted if she gave them an excuse to banish her from Scotland Yard to some distant village. To that end, she’s assigned to go with her boss, Superintendent Isabelle Ardery, to the town of Ludlow to look into the apparent suicide of the much-respected local church deacon, Ian Druitt.

Druitt died in police custody, apparently having hanged himself after being hauled in for questioning about shocking allegations. His father, who is well connected, does not believe Druitt would have killed himself, much less committed the crime. A member of Parliament wants Scotland Yard to review the report on the death in custody.

Ardery is hoping that, during their time working closely together, Havers will stray into some of the disobedient and disrespectful behavior that’s gotten her into so much trouble in the past. But Havers, normally as rough as Lynley is aristocratic, is determined to be a model underling.

The problem is, despite her flaws, Havers is a very good police officer, and once she’s on a scent, she’s as determined as a bulldog. Early on in their investigations, Havers becomes convinced that Druitt did not kill himself, and that there’s quite a lot in Ludlow that needs a closer look. Unfortunately, Ardery, distracted by her personal problems, just wants to close the case and get back to London as quickly as possible.

When they do return to London, and Havers faces a dilemma about what to put in the report Ardery orders her to prepare, Lynley takes action in a way that could get them both in serious trouble.

As a result, Lynley and Havers are dispatched to Ludlow to settle things one way or another – and quickly.

The more the two follow leads and ask questions, the more secrets they discover under the surface of Ludlow, a seemingly quiet college town. As the case grows ever more complicated, they fear that they won’t meet the deadline that’s been imposed on them.

The book’s title takes on several layers of meaning, and it’s not just Havers who’s threatened with punishment.

The Punishment She Deserves is rich with characters, well beyond the familiar Lynley, Havers and Ardery. As readers, with the help of Lynley and Havers, try to figure out what really happened in Ludlow, other stories begin to emerge.

The book is long – 23 hours as an audio book, more than 700 pages in print – but it doesn’t seem that way, because it’s so rich with twists, insights and subplots. There is much to think about: the lies people tell, including to themselves; what it means to be a good parent; friendship; duty; justice…

And because the book is so well plotted and the characters so fully developed, it’s easy to follow Simon Vance’s expert reading on the audio version.

By the end, you will be so satisfied with this outstanding book in a fine series that – dare I say it? – you might feel like dancing, just as Barbara Havers is doing. Really. You have to read this book to believe it.

1 Response to Lies and other tangled webs