A prudent president at a dangerous time

Tom Dillon says Jeffrey Engel’s new book on the first President Bush takes a worthwhile look at a time most of us lived  through without fully understanding.

WHEN THE WORLD SEEMED NEW: George H.W. Bush and the End of the Cold War.” By Jeffrey A. Engel. Houghton Mifflin Harcourt. 596 pages. $35. 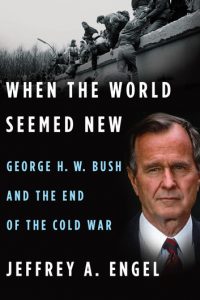 Most of us lived through the end of the Cold War in the early 1990s without realizing what a dangerous time it was for this country and others. The period included the first Gulf War, the fall of the Berlin Wall, the Tiananmen Square crackdown on democracy in China and the end of the Soviet Union, among many other events.

These 20-some years since invite perspective and a good rereading of the history, and that is just what Jeffrey A. Engel has given us in When the World Seemed New: George H.W. Bush and the End of the Cold War.

Engel, the founding director of the Center for Presidential History at Southern Methodist University, spent some 10 years in the research and writing of this book, and he clearly believes that the country was fortunate to have at its helm a dispassionate man who thought at great length before acting. Engel calls Bush “a prudent practitioner of Hippocratic diplomacy.”

Much of the book deals with the give-and-take between Bush and Soviet leader Mikhail Gorbachev during Gorbachev’s reform movement known as perestroika, and some of it shows Bush’s timidity during his first months in office following the presidency of Ronald Reagan.

He can do little, for example, to stop China’s crackdown on dissidents in Tiananmen Square in Beijing in 1989, despite his earlier service as ambassador to China and the friendships he developed during those years. He is, as well, slow to react to a coup attempt against Manuel Noriega in Panama.

But he puts together a coalition, notably including Soviet support, to drive Saddam Hussein’s Iraqi army out of Kuwait during the first Gulf War, and he “rode the stream of history,” as Engel puts it, through the fall of East Germany and eventual merging of the two Germanys into one.

As Engel puts it, Bush was “neither creative nor innovative, neither a radical or a revolutionary, but was instead content to follow ‘what worked.’ This is what made him a success.”

The book gives one pause several times. Bush and his allies agreed to no eastern expansion for NATO as Germany was reunited, and that promise was quickly broken when newly freed countries such as Hungary and Poland applied for NATO membership in the years after the end of the Cold War. That still rankles in Russia. As one general raged, “We have lost World War III without a shot being fired.”

Bush quietened such hawks as Dick Cheney – his secretary of defense – when Cheney advocated a continued hard line against the Soviets. Of course, Cheney had his time in power later on as vice president to President George W. Bush.

Then there’s the story of Col. Vladimir Putin, at the time a KGB operative in Dresden, East Germany. By himself, he stood down a crowd of hundreds of people attempting to take over the KGB headquarters in Dresden. Reinforcements never showed up, and Putin later left East Germany angered about what he called a “paralysis of power” in the USSR.

The end of the Cold War, of course, loosened new forces and hatreds in the world, most notably the wars that broke out in the Balkans after the dissolution of the country of Yugoslavia. That was left for George Bush’s successor, Bill Clinton, to deal with. That was something Bush and his team probably did not foresee.

Yet Engel says Bush’s prudent style was what was needed at the time. “We cannot know for certain what a triumphalist, a more hawkish, or a more virulently nationalist president would have meant for global security in 1989 and immediately after,” he says near the end of this lengthy volume.

But he adds, “ …there can be no doubt that a more bellicose president in the White House during such tumultuous times might well have produced a more dangerous result.”