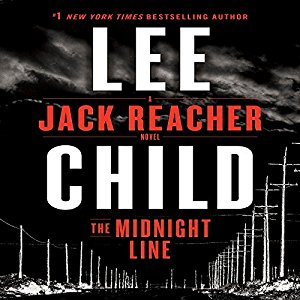 I’d heard about Lee Child’s Jack Reacher, of course – 21 or so best-selling thrillers, some short stories and, oh, a movie or two, among other appearances. But somehow I’d never read a Jack Reacher novel.

I seem to have picked a good one to start with. It’s a thriller, yes, with some rousing fight scenes in which Reacher, the giant former Army cop, takes down multiple opponents; corpses littered here and there, and some operations that are not exactly legal. As an audio book, The Midnight Line was sufficiently suspenseful to keep me listening and even driving extra miles to get to the conclusion of a scene. When I got to the end of the book, I was almost afraid to keep going, for fear of what the outcome might be. But I did.

Having read reviews of previous Reacher novels, I expected all that. Reacher is a West Point grad who left the Army as a major, with an honorable discharge after 13 years of service in which he learned quite a lot, thank you, including how to fight effectively and a strong, if sometimes unconventional, idea of morality. Now he’s a loner, a drifter, traveling the country with no possessions other than his toothbrush, finding situations, usually dangerous, that demand his attention. He’s unusually big – his enemies in this book refer to him as Bigfoot and the Incredible Hulk, among other names.

What I didn’t expect was a sensitive story that would leave me in tears.

This story begins when Reacher, taking a break during a bus ride to wherever, strolls through a small town in Wisconsin and spies a West Point class ring in a pawnshop window. Immediately interested, he goes into the store and examines the ring. It’s class of 2005 and very small, so he figures it must have belonged to a woman. There are initials been commissioned into the Army during a tough time, in the heat of the wars in Iraq and Afghanistan.

There must be a story there, he reasons, knowing from his own experiences that cadets don’t earn a West Point ring easily, and they don’t give them up unless circumstances are dire in one way or another.

Reacher sets out to find the woman and return her ring.

The quest takes him across the vast, unforgiving plains of the upper Midwest and into the wilds of Wyoming. Along the way, he discovers a darker story than even he imagined, and, increasingly, danger. Eventually, he joins forces with a missing-persons private detective from Illinois and a couple of other, unlikely people. To say more would spoil the reader or listener’s opportunity to follow Child’s expert unfolding of a story that is full not only of suspense and thrills, but also of pathos and humanity.

Dick Hill’s narration does a fine job of matter-of-factly telling a story that’s often gritty and harrowing, and occasionally heart-wrenching.

This entry was posted in Audio Books, Thriller/Suspense and tagged Jack Reacher, Lee Child, The Midnight Line. Bookmark the permalink.