A mad and maddening world 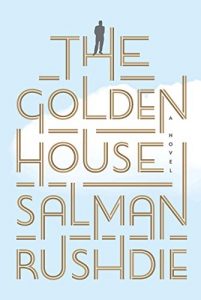 Salman Rushdie’s new novel captures this moment in time in America in a brilliant and disturbing way.

And how else could it be, given that Rushdie has taken it upon himself to write about Donald Trump – and not just once, but a double dose?

First, we have the Golden family – strong patriarch in his 70s, three grown sons who are all flawed and still under his thumb, and, before long, a beautiful young Russian immigrant wife. The Goldens have left their unidentified homeland in mysterious circumstances, taking on new identities as they settle into a mansion in New York City. Father and sons have given themselves suitably pretentious names: The father, who, by the way, plays the violin, dubs himself Nero Golden. His Golden sons are Petronius, Lucius Apuleius and Dionysus.

Each of the sons is flawed and troubled in his own way, and behind the father’s great wealth are dark secrets. Part of the story is learning some of those secrets, and another part is seeing how they haunt the family.

The Goldens arrive as Barack Obama is taking office, and the story plays out against the backdrop of the Obama era, with the financial collapse that ushered it in and the deepening divisions among Americans, especially about race and gender identity.

The narrator is Rene, an intelligent, sensitive young man whose family owns a house on a garden that’s open only to those whose houses border it including, now, the mysterious Goldens. Aspiring to be a filmmaker, Rene becomes fascinated with this family and determined to uncover their secrets. Gradually, he becomes more involved with them than he ever intended.

No one could miss the allusions to the Trump family, but Rushdie also gives us a Trump figure. The book progresses to the 2016 election, in which a crass, woefully unqualified green-haired character who calls himself the Joker and does, indeed, resemble a comic-book villain, improbably surges to victory.

While much of the book is exaggerated and at times wryly funny, when Rushdie has his scary cartoon Joker utter words that were actually spoken by Trump, it’s not amusing at all. It’s frightening.

Ably read by Vikas Adam, the audio presentation of the book skillfully captures the mood and the times.

As the novel careens along and Rene is both learning more about the Goldens and working on his screenplay, it is sometimes difficult to sort out what’s actually supposed to be happening and what is made up. If that’s not a metaphor for our society, I don’t know what is.

It’s no accident that Rene is a filmmaker. The story unfolds cinematically, in scenes and bursts of action, and there is little deep character development. Rushdie set out not to write a great and timeless novel, but rather to hold up a mirror to this moment in America. What he shows us is not pretty.