Bob Moyer takes time out from his traveling, petanquing, haikuing, swing dancing and other passions to get caught up on a book review. 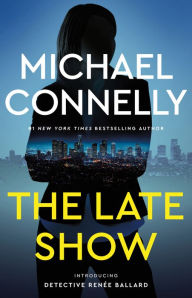 Michael Connelly has been granted the mantle of successor to Raymond Chandler, and he has worn it with distinction. His Bosch is to the L.A. Police Department what Chandler‘s Marlowe was to L.A.

Marlowe walked down the mean streets of L.A., while Bosch had to maneuver through the mean halls of the L.A.P.D. Both loners, both as hard-boiled as they get.

But Bosch has moved into retirement phase, and obviously Connelly had the urge to move on with a new series. His solution turns out to be very successful. The halls and procedures of the L.A.P.D. are comfortable to both reader and author. Why not put a new face in a familiar place? Voila — Renee Ballard.

Although female, Officer Ballard has a lot in common with Bosch. Like him, she’s on the right side of everything except her superiors. She brought charges against her lead officer, lost the case, and as punishment was banned to THE LATE SHOW — the graveyard, the deadhead, the third shift. There, she and her partner get to handle every case that comes along — but then pass it on to the day shift.

That’s where the adventure comes in here. Ballard keeps unauthorized connections to two cases, both of which could and do endanger her life and career. One is the brutal beating of a transgender prostitute; the other is a “four bodies on the floor” case that leads to a cop killing. She tracks the first case until she is sure she has her man. When she does, she realizes “Nothing in her life beat it. It had been a long time coming to her on the late show but now she felt it and she knew deep down it was the reason she would never quit, no matter where they put her or what they said about her.”

The second case comes after she plies the same path that led to so many of Bosch’s successes — close reading of the case file. It’s there she comes “…across a sentence and a question that turned her thoughts on the case in a new direction.”  That direction leads her to the solution of the murder.

Ballard faces politics and possible death with strength and ingenuity, surviving both. She leads an alternative lifestyle, and comes to discover in her travails that she has something different inside her: “Something dark. Something scary.”  And something interesting for the reader. Long live Renee Ballard.