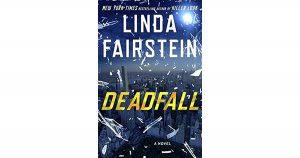 Alex Cooper is back – sort of – after her kidnapping ordeal, but she’s supposed to be on leave from work, and she’s struggling emotionally.

A quiet time of healing is not in the works, however. Leaving a fund-raising gala at the Metropolitan Museum of Art, Coop hears a man call her name. Before she can respond, her boss, District Attorney Paul Battaglia, has been shot twice in the head by someone in a passing car, and he’s dying in her arms.

As if all that weren’t sufficiently traumatic, especially for someone already in a fragile state of mind, Coop quickly realizes that she’s high on the list of suspects in her boss’ death. And far from showing any professional courtesy, some of the investigators seem bent on treating her more harshly than they would anyone else.

Writing what she knows and doing it well, Linda Fairstein has had great success with her long-running series of crime/police detective novels starring Alexandra Cooper, head of the sex crimes unit for the Manhattan District Attorney’s Office.

In real life, Fairstein held that position herself for many years, and she draws on her own experiences as well as her deep knowledge of Manhattan.

She’s developed a winning formula for these novels, although there’s always plenty of fresh material: new villains, interesting plots, developments in Coop’s personal life and new settings that lend themselves to description and historical exposition.

This time, the storyline gives Fairstein an opportunity to educate her readers about global wildlife preservation, the lucrative and illegal trade in ivory and other goods, people who pay big bucks to kill unusual and endangered animals, exclusive hunting preserves including the one where Justice Antonin Scalia died and the Bronx zoo, among other interesting information.

Anyone who knows Coop knows she’s not going to follow orders to stay out of the investigation into Battaglia’s murder, and her boyfriend, NYPD Detective Mike Chapman, is likely to be aiding and abetting her efforts.

There were times in Deadfall when I got a little impatient with Coop’s recalcitrance, as well as her self-pity, but as one does with an old friend, I forgave her and went on with the story. It was worth it in the long run.

Fairstein’s Alex Cooper novels work especially well as audio books. The long sections detailing, for example, the history of the Bronx Zoo are not what we expect as dialogue in most novels and might make some readers impatient. But when Barbara Rosenblat reads them, they make for fascinating listening and add to the enjoyment of the story.