Hot on the trail of a missing island 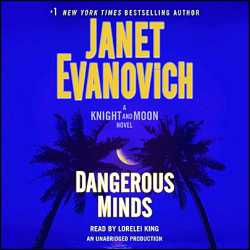 When Janet Ivanovich’s first Knight and Moon novel hit the stands a year ago, I quickly declared the new series my second favorite of Ivanovich’s prolific offerings (the Stephanie Plum books have a lock on No. 1). Now Dangerous Minds, the second in the series, has arrived, and, yep, it’s another good one.

Riley Moon, a Texas sheriff’s daughter with Harvard degrees in business and law, was supposed to be building a high-powered career in the banking industry, but through a strange series of events, she finds herself in the role of “amanuensis” to Emerson Knight, whose inherited wealth is exceeded only by his eccentricities. It doesn’t help Riley’s occasional attempts to extricate herself from this situation that Emerson is young, handsome and charming, albeit in a decidedly odd way. And, as an introvert with limited social skills, he needs her help.

Enter Wayan Bagus, a Buddhist monk who wants Emerson to help him find his island, which was near Samoa before it disappeared. Yes, an island complete with rain forest, beaches, a mountain and even a volcano vanished, after some strange men forced Wayan Bagus to leave.

Emerson rallies his team – in addition to Riley, there’s Vernon, Emerson’s cousin, from West Virginia, who is living in an R.V. behind Emerson’s mansion in Rock Creek Park – and starts asking questions around Washington. But it quickly becomes obvious that some pretty dangerous people don’t want the missing island found.

Opposition and danger, of course, only intensify Emerson’s resolve to solve the puzzle, and soon the unlikely team, along with the monk, is off to Yellowstone National Park and then to Hawaii. It seems, strangely enough, that there’s some deep, dark, dangerous secret involved, and that the guardian of the secret is the National Park Service.

There’s plenty of adventure, action, suspense and some quirky violence in this tale. There’s also some esoteric science, which may or may not be accurate. And, of course, there’s the budding romance. But, true to Evanovich form, the main element in Dangerous Minds is humor – improbable, often ironic, highly entertaining humor.

Lorelei King, well known to fans of audio books and the narrator of many Stephanie Plum tales, puts her skills to good use with Knight and Moon. She manages to read the often over-the-top scenes and conversations with what sounds like a straight face – with only a hint of a sly wink.