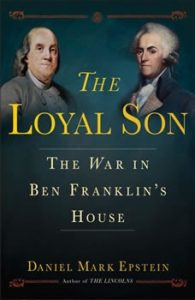 Most of us probably think we know the story of Benjamin Franklin, and certainly the story of the American Revolution and the Independence from England whose anniversary we are about to celebrate yet again.

If you read, or listen to as I did, this engrossing new book by Daniel Mark Epstein, you’ll realize that there is a lot to both of those stories that most of us don’t know.

And for many people living in the former colonies at the time, the Revolutionary War was less a clear-cut military action between two countries and more a civil war, with neighbors, former friends and even relatives quarreling bitterly and attacking one another – often brutally. The lines between who was a patriot, loyal to the effort to separate from England and establish a new nation, and who was a loyalist, hoping to preserve ties with the mother country, were in many cases amorphous and evolving.

Thus we get the double meaning of Epstein’s title: William Franklin, the illegitimate son whom Franklin took from his mysterious mother and raised in his home, was lovingly loyal to his father – but in later years, he was loyal to his king and country while his father was one of the leading forces in the revolution.

William was his father’s close companion, his able assistant in scientific experiments such as the famous kite-flying venture. He accompanied Franklin on some of his diplomatic missions to England, attempts to improve relations between Parliament and the colonies. With cultured manners and a winning personality, he was more popular in London socially than was his father. He found his bride in England, and he also made the connections that led to his becoming the governor of New Jersey.

As the situation deteriorated and war against England appeared inevitable, Benjamin Franklin became one of the foremost patriots. William, however, as a royal governor, remained convinced that the loyalists were on the better course and deserved continued support.

The resulting rift between the two men grew into an apparently unbridgeable chasm, causing much distress for the other members of the family as well as for father and son.

The elder Franklin spent the war as a diplomat in Paris, helping to secure vital French support for the American cause. He also, as is well known, enjoyed Parisian high society. William Franklin’s illegitimate son, Temple Franklin, who had come to the colonies as a teenager after early schooling and foster care in England, accompanied his grandfather to Paris as his aide. Meanwhile, William Franklin, Benjamin’s son and Temple’s father, was imprisoned for his role as a loyalist. At first he was only under tolerable house arrest, but later his recalcitrance led to his being in a squalid, harsh prison that nearly broke his health. His wife died while he was imprisoned, unable to get permission to rush to her side.

While others, including George Washington, tried to help William Franklin, his father, the influential and revered Benjamin, left him to his fate.

Even after the war, when William sought to reconcile with his father, Benjamin Franklin never seemed to be able to forgive and move on.

Epstein tells a fascinating story that reminds us that even though we tend to transform our national heroes into some sort of super beings, they were only human, flawed as all humans are. And Benjamin Franklin, a genius and passionate man who lived life more fully than most people do, was much more complex than our image of the genial elder statesman.

Epstein, a noted poet as well as a biographer, brings history to life, with lots of personal details, insights and anecdotes. In the audio version, Scott Brick does justice to a fascinating story.