Bob Moyer, traveling  gourmet, has found time to sample a new book and write a review. 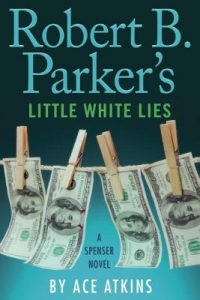 After dozens of Spenser adventures by Robert B. Parker, and now seven by his chosen successor, Ace Atkinson, the formula is pretty clear. There’s never much mystery about whodunit. Someone shows up in Spenser’s office, interests him in a case, and before long he’s onto the bad guy. For the rest of the book, he employs his patented investigative technique – “When at first you don’t succeed, keep bugging the hell out of people and see what shakes out” – and then wreaks justice, legal or otherwise, on the villain. With this patented lack of plot excitement, what keeps Spenser’s fans coming back?

Simple. For the ride.

Time spent with a Spenser novel is a trip around Spenser’s Boston (the endpapers are maps), making familiar stops along the way. In this latest case, he takes on a client who lost a huge sum to a con artist. To track him down, Spenser talks with his lawyer over Schnitzel and a Samuel Smith Oatmeal Stout at Jonathan Ives’, and interviews his cop contact over eggs, hash and raisin toast at Agawam’s. Long-time trainer Henry Cimoli puts him through a rigorous workout at his gym, as a prelude to the requisite fistfight with mercenaries later in the book. And, of course, Spenser fixes a dinner of poulet au citron et lavande with a bottle of Macon, Joe Williams playing on the stereo, and dialogue like this with Susan, his significant other:

Susan gave a wicked grin. “That’s like saying your car ran out of gas.”

“Did I mention my chicken is free range?”

And then the punch line —

“I can take care of your chicken after dinner.”

Through it all, Spenser rattles off bon mots, banter, and quotes from sources as varied as Shakespeare, Joe Friday, and Sir Galahad – sometimes two on a page. During the ultimate gun battle in the Vermont woods, joined by his sidekick Hawk, he even works in two lines from Robert Frost between shotgun blasts. Oh, and he does get the money back.

All in all, it’s a comfortable, familiar ride with one caveat. Readers can usually rip through a Spenser novel in as little as one sitting. This time, however, the read takes a bit longer. Parker and now Atkinson usually adhere to tenet #10 of ELMORE LEONARD’S 10 RULES OF WRITING:

“Try to leave out the part that readers tend to skip.”

It seems Parker’s designated successor has left a few of those parts lying around in the narrative of this latest adventure.

This entry was posted in Detective fiction, Mysteries, Thriller/Suspense and tagged Robert B. Parker, Spenser Ace Atkinson. Bookmark the permalink.