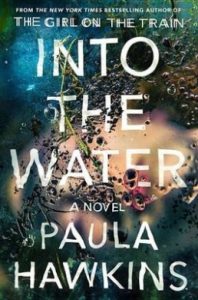 While I liked and was impressed by Paula Hawkins’ runaway bestseller The Girl on the Train, I didn’t love it as much as a lot of readers did. My problem was that, although the writing, the suspense, the mystery and the psychological insights were terrific, I didn’t really like any of the characters. If there’s not a character I like, one whose fate I care about, one who seems worth of my concern, then I don’t get fully engaged in a novel.

I have no such reservations about Hawkins’ excellent new book, Into the Water. This novel, too, is beautifully written, even poetic at times. The mystery – or mysteries – surrounding the deaths of several women in a particular part of a river that flows through a small English town is intricate and deeply layered. Again, there are riveting psychological insights that gradually unfold, enabling us to better understand various characters.

And this time, several of those characters are people I find not only interesting but also sympathetic – people about whom I come to care.

As the book begins, a woman, single mother of a 15-year-old girl, is found dead in the river’s “drowning pool.” A few months earlier, a girl who was the teenager’s close friend drowned in the same place. The town’s history includes other women who died in the river.

Are the deaths related? Are they suicides or murders? What is going on?

There are even those in the town who communicate – or so they say – with the dead, adding to the mystery.

The younger sister of the most recently drowned woman, long estranged from her sister, arrives to take care of her newly orphaned 15-year-old niece. She has her own dark secrets, as do the police officers investigating the deaths. The more we learn about people in town, the more secrets come to light, and the more we realize connections among various people. Then too, there are questions not only about who is telling the truth, but also about what truth is, and how memories can be unreliable.

The audio version of the book, using five voice actors, enhances the story, making for a gripping presentation.

The Girl on a Train is good; Into the Water is even better.

This entry was posted in Audio Books, Mysteries, Thriller/Suspense and tagged audio book, Into the Water, Paula Hawkins. Bookmark the permalink.