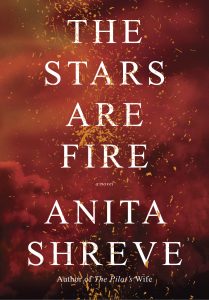 In the long, hot summer of 1947, a drought took hold in Maine with a vengeance. By October, conditions were dire, and when fires broke out, they savaged the forests and moved eastward, devouring towns and racing on toward the ocean, destroying homes and killing people and animals. Evidence of the Great Fires of 1947 can still be seen in some places.

Combining this history with her fertile imagination, Anita Shreve has created a vibrant and dramatic story of a young mother’s struggles to survive disasters of more than one variety.

Grace Holland is 24, the mother of two young children and pregnant yet again when the fire hits the small coastal town where she lives. She’s already distressed by the troubled relationship she has with her husband, Gene, a surveyor and a veteran who does not talk about his experiences in the war.

The night the fires come to their town, Gene has gone out with other men to make a firebreak, thinking he’ll have time to get home and evacuate the family if necessary. But Grace is awakened in the middle of the night to see that there’s no time to wait. With no vehicle, she flees with her toddlers and a few necessities, rousing her best friend next door. They head for the beach, where they huddle in the sand under wet blankets for hours.

Grace, her friend and their children survive, but Grace miscarries at the hospital. When she recovers, she finds that she must make a new life for herself and her two children with no house, clothes or household goods, no money, no vital paperwork and no word of what might have become of Gene. He is listed as among the officially missing.

Eventually, Grace takes the children and her mother, who also has been left homeless, to the mansion that had recently been left to Gene upon the death of his mother. Grace and her mother-in-law had never gotten along, and Grace had not wanted to move into the mansion, but now everything has changed.

The mansion, she discovers, is not empty. An Irish concert pianist named Aidan who had been traveling in the area on a concert tour has been staying there since he fled the fires. Grace invites Aidan to stay and use her mother-in-law’s piano while he finds his next position.

Grace gets a job, learns to drive and blossoms into a whole new person. She’d married Gene soon after starting college classes and had never been on her own. Now, responsible for herself, her children and her mother, she discovers resources and strength she never knew she had. With Aidan, she also discovers a different sort of relationship.

But then one day the new life she has built is shattered in an unexpected way, and Grace is challenged anew. Will she have the strength and courage to deal with this new threat?

The plot is a bit convenient or contrived at times, and some details are never convincingly explained. While there are some real surprises, other developments are predictable, even if they are welcomed.

We come to understand and sympathize with Grace, but some other characters, particularly Gene, are never completely comprehensible or fully developed.

All in all, though, the book is well worth reading. Shreve’s prose is vivid and descriptive, making the fire and the devastation it leaves seem real. Her portrayal of post-war American society and women’s place in it is interesting and instructive. Grace’s story is an ultimately inspiring one that will resonate with many women.

Suzanne Elise Freeman does a fine job of bringing the story to life in the audio version.

This entry was posted in Audio Books, Popular fiction and tagged Anita Shreve, audio book, Great Fires of Maine, The Stars are Fire. Bookmark the permalink.