Probing the past in L.A.

Bob Moyer takes a look at the latest book in a series he’s long enjoyed. 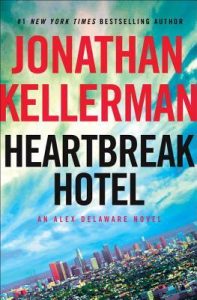 The duo of LAPD Detective Milo Sturgis and child psychologist Alex Delaware has taken on a number of demeanors over the many volumes of their adventures against crime.  Foremost, of course, is Sherlock Holmes and Dr. Watson, a yin and yang combo of intuition and analysis.  Other characterizations obtain, particularly, given their penchant for banter, Milo’s portly figure, and Alex’s dry delivery, Laurel and Hardy.  In this latest installment, Milo comes up with a new job description: “When you get down to it, we’re both historians.”

That’s exactly the skill they need for this latest case.  Thalia Mars, just a few days shy of her 100th birthday, cajoles Alex into a meeting, getting his attention with some enigmatic questioning.  When he returns to the decaying suite in the hotel where she has lived for more than six decades, he finds her dead.  No immediate motive appears, with nothing of value kept or missing from her suite, and her estate destined for a children’s hospital.  It’s up to Alex and Milo to go “…bravely into the past,” to re-create her “…increasingly narrowing world, two rooms her universe.”

A few fragile threads emerge, leading them along unusual paths.  Well, unusual in another city perhaps, but not Los Angeles.  After all, it’s “…a city where the county coroner runs a retail website and guides driving pimped-up hearses cruise past the manors of dead rich people, doling out schadenfreude.”  The trail leads to a past strewn with mobsters, lawyers and/or thieves, and finally proves to be the result of “…the long arm of the lawless,” executed by a “…femme way past fatale.”

The progress toward Alex’s intuitive jump to a solution is enhanced here with a larger role for his significant other, Robin.  She interjects herself into his ruminations, and provides a female perspective hitherto unplumbed in this series.  It’s just the jolt Alex needs and leads him to a discovery that makes the coroner comment that, “You’re a smart man.  Or you understand women. … Both possibilities scare me.”

Of course, it doesn’t scare us, it delights us once again.  Check into the Heartbreak Hotel.  It’s a pleasant visit.