Bob Moyer wrote this review a while back, but either because of human error or a disturbance in the force, it never made it onto the blog. The book has been out since last summer, but never fear if you missed it – it’s still around, and still good. 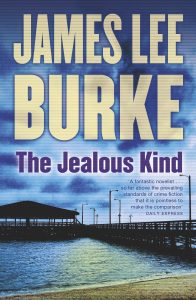 James Lee Burke has a penchant for placing his heroes in treacherous territory. Pity poor Aaron Holland Broussard. He’s confronted with traps, peaks and valleys, bogs, shifting ground, all with no charts, in that dreadful place called — Young Love.

It’s Houston in the 1950s, and convertibles and hotrods fill the parking lots of drive-ins everywhere. It’s in one of those that 17-year-old Aaron intervenes in an argument between Valerie Epstein and Grady Harrelson. He gains two things with that move — the love of his life, and a sworn enemy.

Grady, it seems, is The Jealous Kind, who “…don’t love themselves, so they can’t love or trust anyone else. There’s no way to fix them,” says Valerie.

Grady is also the dangerous kind. His daddy is a mobster, and Grady launches inconceivable ferocity on Aaron and his family. Instead of worrying “…about dealing with a collection of spoiled rich kids, (they were) a few feet away from men who fixed prizefights and trafficked in narcotics and prostitution and committed murder for no other reason than greed.”

In a bow to the world of folklore, Aaron descends, literally, into the underworld to do battle with the forces of evil, and to become a man by finding the courage his father had found as a soldier in the Great War.

The forces of evil take on a variety of vivid faces: the high school shop teacher who preys on young boys; the mobster’s son disfigured by botched plastic surgery; the gangster’s moll who makes moves on Aaron; and, of course, Grady himself.

In his picaresque but perilous journey, Aaron is joined by his very own Sancho Panza, Saber Bledsoe, who can get everybody in trouble but nobody out. In the middle of the swirling, emerging class war that winds its way through Burke’s narrative, there’s also a murder, a crime that complicates Aaron’s rise against evil.

And the course of true love, two people “…unable to enjoy pleasure without the presence of the other.” A binding love carries Valerie and Aaron through the conflict to a place where “…life was a song, eternal in nature, and the smell and secrets of creation lay in the tumble of every wave that crested and receded into the Gulf.”

Aaron’s story is another chapter in the Holland family history, which stretches across many years and many books. With his usual unsurpassed skill, Burke blends the natural world with the nature of the human beast known as Holland.

He also manages to balance the love story with the lawless violence of the plotline. That balance makes this quite possibly the best book in the series, and one of the best he’s written. It fills out the history, while also standing on its own. Quite a feat. Quite a read.

This entry was posted in Thriller/Suspense and tagged James Lee Burke, The Jealous Kind. Bookmark the permalink.