Around the world with Dirk Pitt 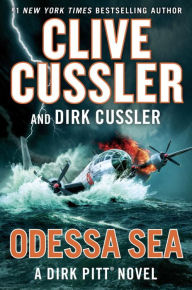 If you like Dirk Pitt novels, you’ll get your money’s worth and more in Odessa Sea, No. 24, out just in time for Christmas.

These novels are great travel books – ideal for listening while driving or for reading while on a plane or waiting in an airport. This time, the tale is also a travel story because the fast-paced action moves from the Black Sea to Bermuda to Norway to the Mediterranean to Gibraltar to England to the Chesapeake Bay … you get the idea.

Pitt is the director of the National Underwater and Marine Agency (NUMA) a fictional government agency that deals with ocean exploration and investigation. (In real life, Clive Cussler has created a real NUMA as a nonprofit organization that works with underwater archaeology and shipwrecks,) Somehow, however, doing what might seem to be fairly routine NUMA tasks (if dive expeditions and the use of high-tech submersibles are ever routine) often embroils Pitt and his relatives and associates in dangerous situations involving international bad guys.

This latest novel is definitely one of those times. When Pitt and his colleague Al Giordino answer a Mayday call from a freighter in the Black Sea, they find most of the crew dead in mysterious circumstances. As they try to unravel the mystery, the two are drawn further and further into a tangled web of crime, violence and global political intrigue. Missing gold from the waning days of the Romanov Empire seems to be involved, as are British warships in World War I and a bomber that went down during the Cold War. Pitt’s adult children, twins Dirk Jr. and Summer, are drawn into the danger and intrigue via a shipwreck they find far away from their dad’s activities.

Before it’s all over, a nuclear bomb threat, rebels in the Ukraine, highly advanced drones, an alluring if sometimes-rash Interpol agent and anoxic zones in various bodies of war are involved.

As usual, the Cusslers lace their action tale with plenty of interesting history and science, which is based in fact even if the tales themselves sometimes stretch credulity. There’s so much action, suspense, thrills and interesting information in this story that a lazier or less ambitious author would have turned it into several novels.

This book is definitely worth the trip!