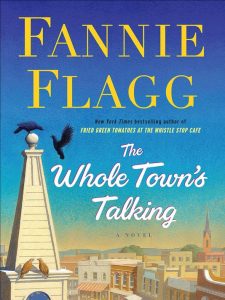 Just as there is comfort food, there are comfort books. Once again, Fannie Flagg has dished up the latter in fine style.

Some people know Fannie Flagg mostly for Fried Green Tomatoes at the Whistle-Stop Café, which became a popular movie, and they think of her as a Southern writer. She is, indeed, a fine Southern writer, but she’s also written some good novels with other settings. We already know the Midwestern town of Elmwood Springs, Mo., from her Welcome to the World, Baby Girl!, Standing in the Rainbow and Can’t Wait to Get to Heaven. (Forgive me if I’ve missed one.)

And now Flagg gives us, as only she could, an overview of the history of Elmwood Springs from its founding in the late 19th century to the present. Fans will be happy to see some familiar characters again, but first-timers won’t have any trouble appreciating what’s here.

Of course, this novel is not some dry accounting of facts, but rather a history through stories of the people who live in Elmwood Springs – and even of many of the people who die and are buried there. Lordor Nordstrom, the dairy farmer who, with his mail-order Swedish bride, got things started back before Elmwood Springs had a name, set aside a special place as a cemetery for family, friends and their descendants. As the years go by, Flagg’s stories of what has “the whole town talking” move easily back and forth between the living and those who find themselves at Still Meadows, mostly at peace but keenly interested in what’s going on.

Still Meadows, as it turns out, is something of a misnomer. Its residents can talk to one another, even if they can’t communicate with the living (for the most part).

This is not, however, a ghost story. It’s very much a book about life, described with Fannie Flagg’s characteristic wisdom. There is often humor in Flagg’s stories, but it’s never slapstick or condescending.

Flagg brings Elmwood Springs alive through a series of fairly brief stories told from a variety of points of view. Common themes and people tie everything together, even as the townsfolk find their lives changed by the Great Depression, wars (worldwide and more limited), women’s suffrage, suburbanization and all sorts of modern inventions, including movies, airplanes and cell phones.

There are happy times and sad. Inevitably, there are tragedies. Some people get what they deserve, while others suffer fates that just don’t seem fair. Yet, the overall feeling among the residents is that life goes on, and that’s mostly a good thing.

Longtime fans should be warned that the audio version is not, as some earlier ones have been, read by Flagg herself. While her Southern accent enhances some of her books, the choice of Kimberly Farr for this one is wise. She’s able to get the Swedish and Midwestern accents just right. And even though the book covers a lot of time, and it’s important to pay attention to the setting of each new section, it’s not hard to follow the audio version.

Whether you listen or read the print version, The Whole Town’s Talking will make you smile a lot, laugh at times and ultimately feel that things aren’t so bad. It’s a celebration of life, family and that elusive thing we call community.