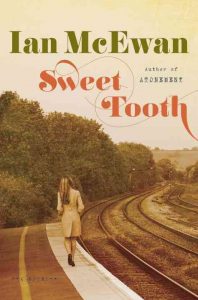 Serena Frome has been playing out of her league all her life.

The mostly overlooked daughter of an Anglican bishop, she attends Cambridge University, where she’s a middling student in “the maths” and the target of derision by more talented male classmates.

She accepts work in the British Security Services, where few females rise above secretarial positions and where her male superiors outmaneuver her.

But it is in love that Serena, lead character in Ian McEwan’s 2012 thriller, is most obviously outplayed. Her first lover is a gay student who uses her to hide his homosexuality. That’s something one must do in early 1970s England.

Her next is a Cambridge professor, 33 years her senior, who enjoys his dalliance and dumps her at a highway rest stop. Her third is the true premier leaguer, however, feasting on her minor league talent.

Thomas Haley is a rising author and literature professor at a second-tier British university. Frome’s superiors assign her to enlist him in an MI 5-sponsored program through which he’ll receive a regular stipend to write whatever fiction he wants. MI 5 considers Haley a supporter of British ideals, a young cultural figure who’ll be a good tool in the Cold War’s clash of ideas.

After Serena reads several of Haley’s graphically sexual short stories, she fantasizes. Once she meets him – he’s handsome, of course – she lands in his bed, something that’s clearly a conflict of interest for a spy, which, technically, she is at this point.

Poor Serena. She just wants a good job, a good lover and a chance to read. She loves literature and would have been an English major but for her mother’s insistence that she use her math talents to enter a male-dominated field, helping liberate all women.

Serena becomes entangled in the intrigues of MI 5, the jealousies of co-workers, the vindictiveness of a rejected suitor and the manipulations of those much craftier than she.

Sweet Tooth is set amid the social and political turmoil of early 1970s London and is a fictional account of government attempts to infiltrate the intellectual community for Cold War purposes. It’s wonderfully written; no one would expect anything less from McEwan. But one gets the sense that it could have just as easily been a long short story as a novel. One, two, maybe three accounts of weekends in bed might have been enough to get across the concept that Serena and Thomas liked sex.

And just about the time the reader wonders where the hell this story is going, McEwan throws in a twist in the last chapter that turns the whole damned thing on its head. Pretty clever.