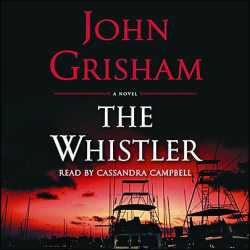 John Grisham has written so many books that it’s hard to keep count: In addition to the legal thrillers (29?), there are children’s books and books about the rural South, among others. His fans are legion, and sometimes they are hard to please.

Some of his books are better than others, of course, but I have yet to try one that wasn’t worth reading. Maybe it’s because the audio version arrived at my house when I needed a good diversion, but for whatever reason, I liked The Whistler, and spent quite a few entranced hours listening to its story rather than the all-too-real news of the day.

Grisham’s thrillers usually expose problems he perceives in the legal system, and this time out, it’s a corrupt judge. The unlikely heroine is Lacy Stoltz, a young woman who, right out of law school, started to work for the Florida Board on Judicial Conduct, the small, underfunded state agency that keeps watch over the ethics of the state’s judges. She’s stayed there, even though the pay isn’t great for a lawyer. Whenever there’s a problem with a judge, Lacey is saddened, but she believes the work is important. Usually, the cases are nothing more remarkable than a judge who has let his alcohol problem interfere with his duties.

But a phone calls plunges Lacy into a case that quickly becomes a lot bigger, more complicated and more dangerous than anything she’s ever handled or even imagined.

From the beginning, it’s all rather cloak-and-dagger, even though lawyers on the BJC don’t carry daggers or guns or even badges. A lawyer who was disbarred and spent a few years in federal prison begins to tell her, bit by bit, about a woman in Florida who he claims is the most corrupt judge in U.S. history. This former lawyer goes by the name Greg Myers, but that’s the result of a legal name change. The information he’s feeding Lacy comes from a go-between who communicates with the real “whistler,” aka “the mole.” Myers is willing to sign his name on the official complaint that will give Lacy’s office the right to start investigating the judge.

Gradually, through clandestine meetings on a boat and chats on burner phones, Lacy learns more of the details – the judge, who turns out to be a woman, is one of the beneficiaries of a huge web of corruption that involves a casino on a small Native American reservation and a gang called the Coast Mafia. There are tales of bribes, kickbacks, rigged trials and a murder or two or three, not to mention an innocent man on Death Row.

The informants, it seems, don’t trust the FBI. They want the BJC to break the case, and their reward will be a hefty whistleblower’s share of the money that will be forfeited.

Lacy and her partner, Hugo Hatch, convince their reluctant boss to let them start the investigation. But before they’ve gone very far, things begin to get very ugly.

Those who want nonstop action in their thrillers may find this book a little slow. The BJC’s work is usually that way – a lot of paperwork and dealing with lawyers. But things pick up after Lacy and Hugo unwisely head to a late-night rendezvous on the reservation. After that, the suspense mounts, and the reader, along with Lacy and others who are involved, begin to suspect danger around every corner. Lacy proves to be a strong and determined woman.

There are some loose ends – at one point, Lacy seems to be starting a romance with a younger man who’s her physical therapist, but then he vanishes from the story. The plight of the innocent man on death row is not resolved as completely as readers might want, but again, maybe that’s because Grisham is demonstrating how slowly the wheels of justice grind.

And Grisham has never been the most eloquent or literary of writers, nor has he pretended to be. Rather, he tells realistic stories of right and wrong, justice and injustice, and how right can ultimately prevail even in a society that sometimes seems terribly corrupt and a system that seems awfully slow to respond.

Sometimes, that’s just the sort of book you need to hear or read.

This entry was posted in Audio Books, Thriller/Suspense and tagged audiobook, John Grisham, The Whistler. Bookmark the permalink.