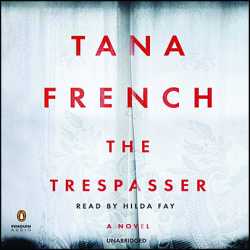 What a delight it is to discover Tana French, a wonderful Irish writer who pours her prodigious literary skills into richly layered detective fiction. I’m a latecomer to the French fan club; this is her sixth book about the Dublin Murder Squad, and she’s regularly on The New York Times bestseller list.

Although all her novels are about the Murder Squad, and this one uses the same two detectives as its immediate predecessor, The Secret Place, it is by no means necessary to have read any of the others to get full enjoyment out of this latest. Once you’ve read The Trespasser, however, you are likely to lose no time laying your hands on French’s earlier works.

The detectives are Antoinette Conway, the only woman on the squad, and Stephen Moran, who’s even newer to the squad than she is. Conway, who had thought that making it to the Murder Squad would be a dream come true, has instead been experiencing something of a nightmare. No one seems to like her; some of her fellow detectives are actively trying to sabotage her. She’s to the point of considering leaving the police force. Steve, her partner, is her only friend on the squad.

Their new case seems at first to be just another of the routine lovers’ spats gone wrong that are so often handed to Antoinette and Steve, though they long to tackle a really complicated and exciting case. Aislinn Murray, a pretty young blonde woman, is found dead in the living room of her stylishly decorated apartment, her bashed lying on the hearth. The table was set for a romantic dinner, and it doesn’t take long to learn that the expected guest was Aislinn’s relatively new boyfriend.

There is, in fact, considerable pressure within the squad for Antoinette and Steve to waste no time in charging the boyfriend, who was in the area of the apartment on the night of the murder.

But Antoinette isn’t one to be pushed, and she begins to see some troubling aspects in this supposedly easy case. For one, she is sure that she’s seen Aislinn somewhere before. And Aislinn’s best friend is acting a little strange, making Antoinette and Steve suspect that she knows more than she’s telling. And why are the other detectives in the squad pushing them so hard?

Antoinette gradually begins to question everything. Is everyone in the squad against her? Can she even trust Steve? Could there be some sinister plot in the background of this increasingly puzzling case? Is she at least partly at fault for the way her colleagues treat her? Is she in danger, beyond the obvious threats to her career?

French’s characters are as complex as her plot. Antoinette was raised by a single mom, who spun a series of stories about the identity of the father. Other than the fact that he hasn’t been around, the one thing Antoinette knows for sure is that he was not white. She’s come up the hard way, and she’s as tough and determined as she is intelligent.

Family also plays an important role as we get to know more about Aislinn, the seemingly Barbie-doll-perfect blonde victim.

French’s prose is literate and evocative. The plot develops rapidly enough to keep the readers’ interest, but not so rapidly as to make us miss the nuances. At least we think we are not missing the nuances, but when all the twists and turns are done, the ending will likely come as a surprise – even though all the elements were there.

This is fine detective fiction, and outstanding writing that transcends genre.

Hilda Fay’s reading is excellent, down to the varied accents, and the compelling story lends itself well to the audio version. French does not write the kind of story in which you need to flip back through the pages to remember who’s who or what happened. We know what Antoinette knows; we worry with her about what she doesn’t know.

Now, where are those other five Murder Squad books?