The Roosevelts, the Great Depression, World War II, the Cold War – these are fascinating topics of fairly recent history that have been dealt with extensively in books, movies and TV documentaries. Susan Quinn, coming at them from a different angle, has written a fascinating book that sheds new light even on stories we’ve heard before. 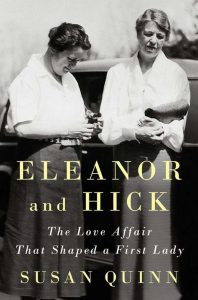 This interesting and informative book tells the story of the relationship between Eleanor Roosevelt and Lorena Hickok, and it also tells much about the separate stories of those two women who had important roles in a critical period in our nation’s history.

It does not, however – thank goodness – dwell on or speculate unduly about the physical relationship between the two, whatever that might have been. If you’re looking for a salacious account of lesbian lovers, you’ll have to look elsewhere. Although Susan Quinn drew on many of Eleanor’s letters, and those that exist of Hickok’s, in her extensive research, she acknowledges that no one really knows how physically intimate the relationship was. In the early years, especially, they write of longing for each other, and of wishing to kiss and touch. It’s well known that for years Hickok, or Hick as she was known, had a room of her own at the White House, next to Eleanor’s, and that the two went on trips and celebrated holidays together. It’s known that Eleanor’s circle of close friends included a number of lesbian couples, and that Hick did have physical relationships with some other women.

But it’s also known that Eleanor was not comfortable with physical intimacy, and that she had close relationships with a number of other people, several of them men, over the years. She and Hick had quarrels and disagreements, many of which seem to have arisen because Hick pushed for the relationship to be more intense and more exclusive than Eleanor wanted. Then too, the mid-20th century, Quinn reminds us, was a very different time when it came to public acknowledgment and acceptance of same-sex couples.

Quinn concludes that the most private details of the relationship remained private, despite some speculation and innuendo (it was also a very different time in terms of the press’ and political opponents’ respecting people’s privacy), and that ultimately, they are not what’s important. To her credit, she deals with the question but doesn’t waste much time on what doesn’t really matter in big-picture terms.

What matters, as Quinn makes clear, is the importance of the relationship in the development of these two women, and what the strengths and reinforcement they gave each other helped these two to achieve.

Quinn weaves in the stories of the early years of both Eleanor and Hick. Their experiences were very different – Hick came from a poor family in South Dakota; Eleanor from a very privileged one in the East – but they had similarities in terms of loneliness and emotional hardships. Their personalities were different, too. Eleanor was naturally shy and withdrawn, although she learned to be assertive and even dogged about her causes. Hick was often loud, brash and not in complete control of her emptions.

They became friends at what was a critical time for Eleanor. An intellectual and somewhat gawky girl, she was pushed into society by her grandmother. Eleanor had married her handsome cousin, Franklin Roosevelt, when she was only 21, and then bore six children in 10 years (one of whom died). Her mother-in-law, Sara Roosevelt, made sure that Eleanor never felt that she was the mistress in her own home or even the most important person in the lives of her husband or children. And she had been crushed by the discovery of Franklin’s affair with her social secretary, Lucy Mercer. Eventually, Eleanor worked to carve out an independent life of her own, pursuing what she considered worthwhile goals with her own friends.

But FDR’s election as president in 1932 threatened to curtail her activities and force her into more of a conventional role as First Lady.

Lorena Hickok, for her part, had worked and scrapped to establish herself as a real newspaper reporter in a profession that tried to relegate women to the society pages. She’d attained considerable success, working as a reporter for The Associated Press covering the presidential campaign, when she was assigned to cover Eleanor. It didn’t take long for their friendship to develop to the point that it was prompting fellow reporters to raise charges of favoritism and making Hick’s professional life difficult.

When she had to choose, Hick chose her relationship with Eleanor, resigning her hard-won job at the AP and accepting the first of several political positions she would hold over the years. For a time, Hick toured areas that had been devastated by the Great Depression, reporting officially to administration officials and privately, in more detail, to Eleanor. She would sorely miss being a journalist the rest of her life, and although she seemed to take pride in Eleanor’s accomplishments, including her popular “My Day” column, she also struggled to accept the fact that Eleanor could easily get articles and books published while she, Hick, the better writer, could not. In Hick’s final years, with her health failing and money needs pressing, she did find her niche as a writer of children’s books and other nonfiction, including a popular biography of Helen Keller.

Both women were intelligent and compassionate; both cared deeply about the many people in the country who were suffering. In the early years, Hick helped bring Eleanor out of her shy, insecure shell and encourage her to speak, write and become more of a public figure. Eleanor succeeded beyond all expectations; in fact, she became something of a force of nature. Even Hick could not keep up with her.

Quinn chronicles the rest of Eleanor’s and Hick’s lives, as FDR won three more terms in the White House and eventually died early in his fourth term. She takes them through the Depression, into World War II and on into the Cold War era. Drawing on a great deal of history and research, she describes enough of what was going on in the White House, the country and the world to give context to what Eleanor and Hick were doing and feeling. She describes the unusual relationship between Eleanor and FDR. After the Lucy Mercer discovery, their physical intimacy stopped, and yet they were closely bound in many ways and cared about each other. Both were independent and proud; each needed the other at times but always hated to acknowledge that need. Often, Eleanor was the idealist, trying to prod Franklin to take actions, some of which he did not believe were politically or strategically wise.

As the years went by, the relationship between Eleanor and Hick grew less intense, although they always remained good friends. After FDR’s death, Hick encouraged Eleanor to use the popularity and esteem she’d earned as First Lady to continue to champion important causes.

As Eleanor forged her post-First Lady role, on the national and international stage, she found new causes and, sometimes, new people to whom she felt especially close. Hick learned, not always happily, to deal with her own dwindling importance, but when she really needed Eleanor, Eleanor was there.

Quinn has done a remarkable job, drawing on a great deal of research and presenting an impressive amount of material while managing to tell a good story. It is, on one level, the story of the relationship between Eleanor and Hick, but it also is the story of two remarkable women who, individually, achieved a great deal and blazed trails that other women would follow.

Read by Kimberly Farr, the audio version moves along well, slowing occasionally as Quinn makes sure we understand what was happening, but never to the point that our minds wander or we lose interest.