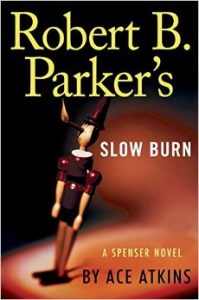 Robert B. Parker may have passed from this mortal coil, but Spenser, his iconic Boston P.I., still packs a pistol under his tailored jacket and a passion for his sweetheart that makes it feel: “…like Gene Krupa was practicing” in his chest.

Parker’s estate asked Ace Atkins, no slouch as a series writer himself, to take over the series. In five novels, he’s done more than just continue the series; he channels Parker in so many ways. Most Spenser fans will agree Atkins has achieved an uncanny continuity; his voice doesn’t disturb the characters we carry around in our brains after dozens of Parker novels. The great banter still pours across the pages.

Spenser and his sidekick Hawk are still the “…Martin and Lewis of beating the crap out of people.”  His apprentice, the Indian Z, still plays kemo sabe to Spenser’s Lone Ranger, and his main squeeze Susan is by his side. Or under him. Or on top. You get the picture. Actually, you don’t get the picture, because, like Parker, Atkins invites you into the banter, but not the bedroom for any erotic escapades. Pearl the dog can still catch a piece of donut in mid-air, and no donut within arm’s reach is safe around Spenser — especially a maple bacon one. Bellson and Quirk the cops still cooperate begrudgingly with Spenser, and the bad guys still have it out for him.

Now that he’s established how things can stay the same, however, Atkins sets us up here for some change in the future. The plot is not a particular page-turner; Spenser takes on an arson case as a favor to a firefighter friend. That case leads to a possible connection to a series of set fires, and we know early on whodunit. We are privy to the whodunit’s thoughts, so it’s a slow reveal to how Spenser will catch the guys. Meanwhile, Bellson gets promoted, Quirk gets a new female captain, Z may be moving to the West Coast, and Spenser suffers a personal loss that forces him into a major decision — which won’t happen until the next book. Neither will the rematch with the gangster’s henchman who fights Spenser to a standstill. Spenser is eagerly awaiting that moment.

So are Spenser’s fan. “Yeehaw,” as he would say.

This entry was posted in Detective fiction, Thriller/Suspense and tagged Ace Atkins, Robert B. Parker, Spenser. Bookmark the permalink.