Benedict Arnold: The rest of the story

Paul O’Connor, student of history, takes a look at a new book about one of the most reviled characters in America’s past. 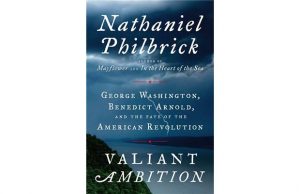 Most Americans, even the service writer at my car dealership’s garage, know of Benedict Arnold: Traitor. Scumbag. One of the characters on the AMC TV series TURN.

Yes to all of those characterizations. But there’s always more to these stories than we got in eighth grade American history, and Nathaniel Philbrick in Valiant Ambition has delivered the fuller context of Arnold’s treachery.

In addition to all of his negatives, Arnold also had some considerable positives. He was one of the America’s best generals in the Revolutionary War, the genius and hero of a naval encounter on Lake Champlain that spoiled British efforts to follow up on their capture of New York, and again both the genius and hero of the decisive stages of the Battle of Saratoga. He may have been whipped in Connecticut and at Quebec, but he proved his courage repeatedly, exacting heavy British casualties as their price for field success.

He was twice wounded seriously in combat, and he expended nearly his entire fortune, which he had earned in the years before the revolution, in the patriot cause.

So, what led a man who had given so much to the cause of independence to commit treachery against his own people? This is where Philbrick tells Arnold’s side of the story.

For reasons that we today would probably consider political corruption but which were seen as essential in the 1770s, Arnold was repeatedly passed over for promotion. The glory and honor he deserved for his courage in battle and his genius in the field were frequently stolen by others, namely Gen. Horatio Gates after the Battle of Saratoga. Lesser officers were promoted over him, while less competent commanders disregarded his sound advice and counsel.

The last straw came in Philadelphia, where he was military governor after the British evacuation. Joseph Read, the scoundrel who several years before had betrayed Washington after the loss of New York, was head of the civilian council and hell bent on establishing republican and egalitarian purity in the city. He tried to have Arnold tried in civilian courts and then succeeded in pressing military charges. Only one minor charge stuck, but that was too much for Arnold’s exalted sense of honor to accept. He went over to the British for a sizable reward.

Philbrick doesn’t take Arnold’s side. The general had plenty of faults, had clearly tried to profit illegally from the war and was dangerously self-centered. Arnold, Philbrick tells us, was going to do what was best for Arnold, not for his nation or for anyone else.

Having thus set Arnold’s treachery in context, Philbrick is then able to provide a more complete telling of Arnold’s failed attempt to surrender West Point to the British.

Philbrick is a master storyteller, but he falls short in explaining the significance of Arnold’s betrayal. The author relates the relentless internal politics of the American forces during the war, their self-serving leaders and a civilian leadership that was inept at best and either corrupt or delusional at worst. Philbrick posits that Arnold’s treachery shook both military and political leaders out of their self-serving coma and into the reality that they would lose the war if they did not act for the greater good.

But he doesn’t provide sufficient evidence to make his case that Arnold was the catalyst of this transformation. Fortunately, this theory appears only in the prologue and the final few pages. The great bulk of this book is solid reporting on a fascinating episode in American history.