The remarkable story of the second First Lady Adams

Here’s an outstanding biography of an often-overlooked woman. 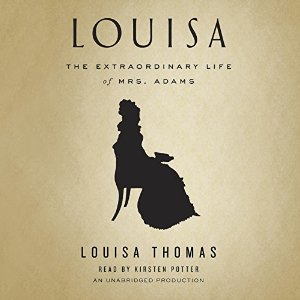 Louisa Thomas has applied her skills as a journalist and an author ably to the fascinating story of a First Lady who deserves the attention: Louisa Catherine Johnson Adams, the wife of John Quincy Adams, America’s sixth president, and daughter-in-law of the second president, John Adams, and of the much better known Abigail Adams.

Like, I suspect, many people, I had barely heard of John Quincy’s wife and certainly had given her no thought before I read this book. I now learn that in 2014, Yale University Press published a biography called Louisa Catherine: The Other Mrs. Adams by Margery M. Heffron, who unfortunately died while writing the book. That biography, I read, ends rather abruptly about the time that the younger Adamses moved into the White House.

Thomas’ book follows Louisa from her privileged if somewhat unorthodox childhood in London until her death in 1852 at age 77. And what an unusual, interesting life she led!

Louisa and her siblings were brought up to think of themselves as Americans because their father was from Maryland, but she was reared as an upper-class English lady and never set foot on United States soil until after she was married. In many ways, as Thomas makes clear, she felt an outsider all her life, no matter where she was

She and John Quincy, who’d been brought up to believe that service to country came first and personal pleasure was always suspect, were an unlikely match. They almost did not marry, and the pattern of discord mixed with strong attraction persisted through much of their long life together. Both struggled with depression at times, and though they were close in many ways, they often seemed not to understand each other.

Almost as soon as they married, her father returned to the United States in disgrace, having suffered a business failure that meant, among other things, that he never paid Louisa’s promised dowry, a development that profoundly affected Louisa’s image of her position as wife.

Her story includes living with John Quincy in foreign cities, mingling with royalty, as he pursued his diplomatic career, finding favor at court even though her husband was not socially inclined and she had to improvise to fit into their surroundings on his meager salary. When they lived in the newly independent United States for brief periods, she found herself profoundly unprepared for the role of an American wife, who was expected, among other things, to manage the household accounts and be able to milk a cow. No one did much to teach her, and John Quincy often made important decisions about their lives and the rearing of their children without consulting her.

One of the most amazing things she did was travel with their third son, a young child, and a few servants of questionable loyalty and ability, some 2,000 miles from St. Petersburg, Russia, to Paris to rejoin her husband. It was late winter, and her carriage alternately moved on runners across snow or wheels through mud. While they were traveling through areas devastated by the Napoleonic wars, Napoleon escaped from Elba and returned to Europe. When she finally reached Paris, her husband seemed unimpressed by what she had accomplished.

Louisa, however, either understood then or came to understand how remarkable her feat had been, and years later she wrote an account of the journey. That account is only one of a wealth of documents that Thomas drew upon to write this book. Louisa grew and changed throughout her marriage, and as her self-confidence increased, she found her voice, and a great outlet for her emotions in writing letters, journals, memoirs and even satirical fiction.

Thomas does an admirable job of combining the great amount of historical and personal information available with her insights into Louisa’s thoughts and actions. She is sympathetic to Louisa, but not blind to her faults. She also does a masterly job of placing the events of the Adamses’ lives into the greater story of what was going on as the new nation moved forward, with its many challenges and the realities of its evolving political system. And yet, although she often deals with what the men who held the power were doing, Thomas always keeps Louisa at the heart of her story.

There is so much of interest in this book. For one, it makes painfully clear how difficult it was in that era to be a woman, even a woman of some position and privilege. Louisa suffered at least a dozen miscarriages; there may have been more that were simply written off, by John Quincy and even by herself, as more of her frequent illnesses. She was also subject to other illnesses and fainting spells, and the treatments for her ailments tended to be such things as bleeding and the application of leeches. Of the four live children to whom she gave birth, only one outlived her. Her daughter died as a toddler while they lived abroad, and two of her three sons died as young adults. She did what she could – mostly behind the scenes, of course – to advance her ambitious yet stubborn and rather haughty husband’s political career, always having to worry about gossip and the suspicions of other women, many of whom considered her a snobby foreigner.

It may be some comfort to those who are dismayed by the political climate in the United States in this election year to read Thomas’ descriptions of the vicious nature of politics in the early to mid-19th century, when John Quincy was in the White House and then for many years in the House of Representatives. Andrew Jackson, who defeated John Quincy for re-election, blamed the Adamses and their supporters in the 1828 election for the death of his wife Rachel, but Louisa Adams also suffered from her share of malicious attacks.

Slavery is an important theme, and Thomas makes it abundantly clear that slavery was widespread in the nation’s capital. Although John Quincy became an important abolitionist voice, even his reactions were complex, and Louisa, whose father’s family were slaveholders, had conflicting emotions and opinions. The rumblings that presaged the Civil War were growing ever louder during the Adamses years in Washington.

It’s also interesting to realize that we aren’t the only ones who live through rapid changes. When the Adamses first began traveling between Massachusetts and Washington, for example, the arduous journey could take weeks, but later in their lives, steamboats made it possible to cover the distance in a few days. And when John Quincy first began working as a diplomat, some Europeans were mystified as to what entity he was representing.

Fittingly, one of the most compelling aspects of the biography is the account of how Louisa grew from an insecure, dependent young wife into the strong, respected woman for whom both houses of Congress took the unprecedented step of adjourning in mourning on the day of her funeral. Thomas does not make the mistake of imposing too much of a 21st-century perspective onto a 19th-century woman’s life. She does, however, draw on the ample material available to her, including much written by Louisa, to bring alive the story of one woman’s journey through life.

This biography, beautifully read by Kirsten Potter, is a good choice for an audiobook. The facts, research and historical context are there, yet all comes together to be as captivating as most novels.