A man of his times

Paul O’Connor found more than he expected in a new biography of General Custer. 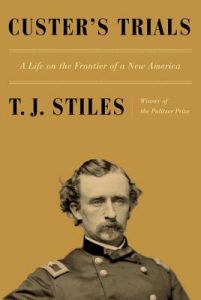 Authors of historical fiction often use a central character who, through benefit of position or chance, can be in place to witness the most important events in the story’s sweep.

Herman Wouk, for example, created Admiral Pug Henry and through both Henry and his family swept us along the Winds of War and War and Remembrance.

T.J. Stiles uses this mechanism in recounting American history from shortly before the Civil War through 1876. But Stiles uses a real character, and his book is nonfiction, not a novel.

Gen. George Armstrong Custer, known mostly for his demise on the Little Big Horn, serves as a splendid vehicle for telling the American story of the era. This is a biography of one exceptionally successful Civil War and Indian Wars general. But it is also the story of a liar, gambler, racist, philanderer, stock market sucker and writer, a man who repeatedly proved to be one step behind the evolution of America in his lifetime.

This is the story of mid-century America’s attitudes on race and gender, on westward expansion, the spread of railroads, the growth of railroad companies and the manipulations that led to the Panic of 1873.

Better than any other writer of the period I have read, Stiles explains the political system under which the U.S. Army and Navy appointed officers. And, in the contraction of the two forces after the war, he explains how both branches became more professional and merit-based in choosing officers.

Through the expanse of this nearly 24-hour listen, Stiles was telling Custer’s story.

An undisciplined cadet at West Point, Custer was fortunate not to have been thrown in prison upon graduation. He entered the war in summer 1861 as the Army’s lowest-ranked officer, but through a series of fortunate bounces, he was soon on the staff of Gen. George McClellan. Luck, Stiles says, was always on Custer’s side, until the day he died, that is.

Given a chance to lead men in battle, Custer excelled. He lacked as a manager and administrator, but when a battle started he was brave, brilliant and lucky. Any number of times, rebel soldiers came within a hair of killing him only to be killed themselves by Custer or one of his men.

Custer was a political animal from a Democratic family in Michigan who openly opposed President Lincoln. His politics were politically correct for McClellan but not for his personal advancement after McClellan’s fall from grace. To prop up his own career, therefore, Custer lied repeatedly about his own positions and actions, hoping to advance in a now Republican-dominated Army. But once it served his purposes, he switched back to the Democratic side, once again lying as to his previous positions. At each turn in his career, he depended on favoritism to advance and he played favorites when advancing those under his command.

His personal side was no more honorable. He cheated on his wife; he tried to cheat in finance but was himself snookered. He gambled himself into a dreadful debt, one that surfaced only after his death and which fell on his widow.

To be honest, when I downloaded this audiobook, I asked myself if I wanted to commit 24 hours to a man about whom I’d already read several books. In the end, I’m glad I did, because this is so much more than a Custer biography. It is a history of how America worked in that crucial quarter century.