The real pursuit of truth

A series has taken a new turn, and Bob Moyer hopes for a course correction. 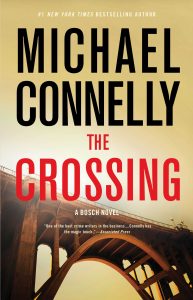 Harry Bosch has been banging around the Los Angeles Police Department for a lot of years.  He’s a unique creature, a badge-carrying paean to the private-eye tradition of Raymond Chandler.  For years, he made life unbearable for killers — and his superiors.  Now, after years of not following police protocol, practice or politics, he’s a civilian.

Now (in the latest installment in the series, published late last year) he’s just banging around Los Angeles, not caught up in the traffic he watches wend down through the hills below his house.  Killers are still out there, and he can catch them, quote.

The opposite of Harry, he doesn’t give a hang if the guy is guilty, he’ll get him off.  This time, however, he needs Harry’s help, because he actually has a client he doesn’t think did “it,” that is, murder anyone, in spite of ironclad DNA evidence.  He baits the hook, and Harry goes for his line.

Of course, Harry finds clues that other investigators don’t count as important — the sound of car doors slamming, a broken wristwatch and other small pieces of a puzzle that won’t go together to prove the guy did it.  The one thing Harry can’t find is The Crossing, the point where the victim and the supposed murderer met.  Meanwhile, Harry becomes a marked man the closer he comes to the real killers.  Before long, Harry has a solution, but the way Haller handles it makes him uncomfortable with being on the “dark side,” as he used to call it.

We don’t either.  Harry and Haller working together doesn’t quite make it: Haller’s a glorified cameo to give Bosch a reason to do his thing, it takes too long to get into the story over Bosch’s backpedalling, and Haller’s bad habits don’t hold up well in the light of Harry’s hard-boiled pursuit of truth.  Let’s hope Harry can work his way back into the real pursuit of truth through the Police Department — or a reasonable facsimile thereof.