Turn Bob Moyer loose with fairy tales, frogs and puns, and you’re in for a treat.

GRETEL AND THE CASE OF THE MISSING FROG PRINTS. A Brothers Grimm Mystery. By P.J. Brackston. Pegasus Crime. 233 pages. $15.95, paperback. 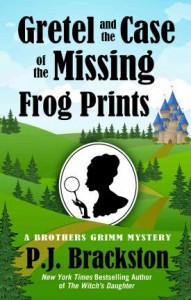 Sometimes the funniest thing about a joke is its setup.

Sometimes the best thing about a book is its title.

Fortunately for the reader, P.J. Brackston maintains the conceit of both here quite admirably in this ever-after telling of the once-upon-a-time known as Hansel and Gretel.

These two haven’t developed much from the compulsive eaters of sweets that got into trouble — they’re just older. The author avoids the realm of young reader status by twisting the tale toward the mature. Hans has developed into an accomplished cook who keeps his sister satiated and struggling to contain her girth in a girdle. For her part, Gretel keeps their larder loaded with her expertise as a detective.

In this debut of the series, the two of them head to the big city of Nuremberg to find the missing frog prints by Albrecht Durer the Younger, now owned by Albrecht Durer the Much, Much Younger (he’s 106). Once there, Hans takes a turn toward the wurst that’s being prepared to break the record for biggest sausage, while Gretel heads to the Grand Hotel to trace the frog prints. Since the city is short of hotel space, they stay with Wolfie, Hans’ boyhood friend — yes, The Boy Who Cried Wolf, grown into a compulsive liar.

Gretel encounters a Grimm cast of characters, including a peckish physician, a nefarious nephew, and a secretive servant girl. Although she’s constantly dealing with distractions such as the royal princesses, a constable intent on incarcerating her, various and sundry sundries, and the rakish Ferdinand von Ferdinand, she plies her trade. As she plumps about town (in all senses of the word), she encounters a bordello in the hotel basement, talking mice who maneuver through underground mazes among buildings, and unusual housekeepers straight from Grimm. With the help of some fairy tale friends, Gretel solves the case just before the author gets her tongue stuck in her cheek permanently.

If you still have a fondness for the folkloric, you may find this series to your liking. There have been two more books released, a prequel and a sequel. Rest assured, you will hear about them.