The Civil War – and more

Paul O’Connor observes that even if it shouldn’t be judged by its cover, this book is good reading nonetheless.

THE WAR THAT FORGED A NATION: WHY THE CIVIL WAR STILL MATTERS. By James McPherson. Read by Grover Gardner. Audible.com. 7 hours and 29 minutes. $19.95. 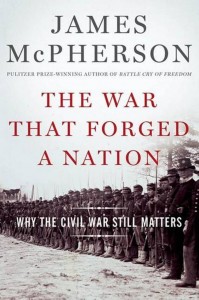 You have to be careful at the bookstore: Buy a book based on its cover and you might not get what you expected.

A number of readers commenting on Amazon’s book site say just that about James McPherson’s newest book. They reasonably expected a book based on the title, one that explores how the Civil War still matters today. Instead, they got one brilliant chapter on that topic and 11 other chapters, each individual essays or book reviews, on a variety of topics about which the famous historian has written in recent years.

Regular readers of Civil War history, and especially fans of McPherson, probably won’t be bothered. This collection of essays, published in mid-2015 and available as an Audible.com download, is informative and thought-provoking, totally worth the time spent listening to the excellent reading by Grover Gardner.

The title essay is the most important. It tells us what anyone watching the Tea Party, the emergence of an anti-democratic, authoritarian strain in our current politics, has no doubt noticed. The philosophy that allowed slaveholders to claim they had the liberty to hold others in bondage exists today, if only in slightly different arguments. The political strains that underlined the march to secession are cloaked in new rhetoric and slightly different issues today, but they remain.

In his other 11 essays, McPherson reports on a wide range of Civil War topics. Mid-19th century attitudes toward life and death were very different from ours today, and knowing those attitudes about a glorious death greatly informs one’s understanding of the common soldier in the war. In another essay, the author explores the concept of “total war,” the brand of war we came to know in the 20th century’s two world wars, and debates whether the Civil War qualified, or whether it should be categorized as “hard war,” a significantly different undertaking.

McPherson is at his best in depicting Lincoln the politician and how he managed the issue of the abolition of slavery. Lincoln knew he couldn’t wage war on an abolitionist rationale, so he led his country to fight for the union. But even in doing that, he gradually prepared his people for the abolition of slavery. The author’s careful study of Lincoln’s words exposes the president’s gradual, almost microscopic changes in language, that changed the Northern cause for war.

Possibly the most exciting chapter focuses on just a few words from the Gettysburg Address: “or any nation, so conceived… can long endure.” Any nation? We often debate whether the Civil War was fought over the maintenance of union or the abolition of slavery. But, in the day, Lincoln and others around the world saw the war as a fight for democracy and liberty. The South, for all its protestations of states’ rights and liberty, was not a democratic society. It was an authoritarian one ruled by the planter class and one that subjugated more humans as slaves than any other nation in the world. If the North lost the Civil War, the fate of democratic government around the world was considered to be doomed. Most interesting are the comments of British Tories and other European royalists who found our form of democratic government distasteful and who prayed for a Southern victory as proof that no nation conceived in liberty and dedicated to the proposition … could long endure.

Two of McPherson’s essays tested my patience. They appear to have come straight from his 2008  book, Tried by War: Abraham Lincoln as Commander in Chief, which I reviewed several months ago. It’s a brilliant book but one that infuriates because it recounts the monstrous ineptitude of Lincoln’s generals.

So, should you venture into a bookstore or library with this book in mind, be prepared. It’s only one chapter about the title. But the other 11 are very worthwhile, too, and McPherson is one of our great living historians on the Civil War.