The North Carolina mountains have produced and inspired several fine writers over the years. Bob Moyer takes a look at the last book by one of them, published last September and not to be missed.

ABOVE THE WATERFALL. By Ron Rash. Ecco. 252 pages. 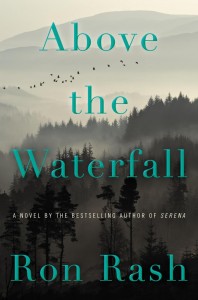 In his latest novel, Ron Rash once again proves his mastery of all things mountain and North Carolina. Throughout these pages, the curve of a mountain road, the fog of a morning, a field of black-eyed susans, all life of a life in the mountains, flow across the pages like paint on a canvas. No one does it better. Yet the author brings to his picture something more than just depiction. He puts into his story what isn’t there any more, what is disappearing before our eyes, what the sheriff here calls “…when the world you knew had up and vanished, and you needed to find something to bring that world back, and you weren’t sure that you could.”  Loss, in other words, what has been lost and replaced by meth labs in trailer parks, resorts where fishing ponds once sat, and pawn shops thriving on stolen goods. That’s the mountain life Rash wrangles onto these pages.

The sheriff has suffered as much loss as anyone — the artistic life he could have led, the woman he could have lived that life with, all behind him now, just three weeks before he retires. His “accomplice” Becky, the local park ranger, carries even more sorrow behind her. When fish are poisoned ABOVE THE WATERFALL, the two of them team up to prove that Gerald, the codger who most keeps the old ways alive here, didn’t do it. As they try to solve the larger mystery, the smaller mysteries of their lives unfold.

The sheriff owes a debt that he doles out in bits and pieces in the narrative; Becky copes daily with the killer who terrorized her kindergarten, and then the killer she lived with in her 20s. To assuage her pain, she took to the woods with only the books of the poet Gerard Manley Hopkins, and immersed herself in his alliterative poetic mode.

In possibly the most magical passages Rash has ever produced, she heads into nature to collect herself, where she shifts into language suffused with the poetic style of Hopkins, changing sometimes in mid-sentence into the calming comfort of poetry created in that moment: “Caught on an angelica tree, a black snake’s cast-off stocking;” “a world become where wind and water pass past unheard;” and “…after the morning in the school basement, word and wonder and world could be one.”

In other words, Rash not only manifests poetry in Hopkins’ style, he does it with the tongue of a character coming to terms with her trauma. Great writing, as well as poetry as good as any that graces paper between covers anywhere.

With the help of a cell phone he mentions in the first three pages (it doesn’t show up again for about 200 pages), the sheriff solves the mystery of the poisoned fish. He also resolves the incident of the hay baler he mentions in those first pages, the smaller mystery in the plot but so much larger in his life. He heads off to retirement with a serious cash reduction and probably with Becky, who finishes the book with a poem of resolution, both for her and the reader.

No mystery here: Ron Rash is one of our best writers, in or out of the mountains.